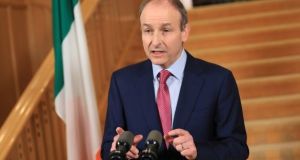 Taoiseach Micheál Martin is rolling the dice on the success of the vaccine rollout. Photograph: Julien Behal

It’s going to be such a treat for TDs on Thursday when they get the chance to come together for a few hours under the same roof as one big dysfunctional family.

It’ll be like Christmas all over again. Hopefully without the touching, the drinking and the fighting.

Having been kept apart for so long, it is feared deputies will go mad when they are finally let loose for a gallop together through the wide open spaces of the Convention Centre Dáil.

One of the last occasions all 160 of them were allowed inhabit the same area was November, when there was a vote of confidence in Tánaiste Leo Varadkar over his leaking of confidential Government information on a new pay deal for doctors. Since then the combination of a drastic pruning of Dáil business along with strict new health-and-safety regulations allowing a maximum of 45 TDs in the auditorium at any one time has seen votes on legislation plummet.

But the Government is rushing through a Bill on mandatory hotel quarantine for some incoming travellers to Ireland, and the vote needs to be taken as soon as possible.

“Tomorrow, where we will be voting on legislation, a full attendance of 160 members has been summoned,” declared the Ceann Comhairle on Wednesday, no doubt looking forward to an afternoon when he won’t spend his time peering out over banks of empty seats looking for signs of political life.

With a potential 159 TDs crammed dangerously into the 2,000-seater venue, Dáil Éireann risks drowning in a lethal pandemic porridge of reckless mask-wearing, sanitiser by the gallon and strict social-distancing rules.

The entire nation is now praying this exceptional sitting goes off without infection, injury or death to any of our precious politicians. If the onerous health-and-safety requirements already applying to a mere quarter of TDs in this huge building are anything to go by, a pilgrimage across the Liffey to the Convention Centre by all members of the House represents a mass movement of humanity to rival the Hajj.

Their courage and dedication is humbling.

But it has to be done, says the Government, and quickly.

No need to tell us, snorted the Opposition on Wednesday, reminding both the Taoiseach and the Minister for Health that Nphet first called for mandatory quarantine nine months ago. Nonetheless, the glum consensus was “better late than never” for this legislation, even if it falls far short and will not work to suppress the virus.

Micheál Martin, neither an epidemiologist nor a medical consultant, continues to stress he is assiduously following the public health advice.

Labour’s Alan Kelly was first out of the traps during Leaders’ Questions to pour tepid water on the Coalition’s new strategy, The Path Ahead, outlined by the Taoiseach on Tuesday evening. Sure it isn’t even a path, he argued. It’s “basically a wing and a prayer and it’s totally relying on vaccines”.

What if some of the new variants make it through in the meantime?

The Corona Variations played throughout the afternoon when the debate began on bringing in the mandatory quarantine law.

Sinn Féin health spokesman David Cullinane agreed that the measure wouldn’t deal with the threat of importing the virus and talked about the increased “anger and frustration” of the general public at the way the Government was handling the crisis.

His colleague Matt Carthy has “never met so many frustrated and angry people ... completely exacerbated” having made big sacrifices including having to witness “the exacerbation in their children’s eyes”.

Cullinane, in a contribution guaranteed to reinforce the Taoiseach’s oft-stated view to his leader, Mary Lou McDonald, that the party was “playing politics” with the pandemic, attacked the Coalition for its hamfisted communications efforts.

“Please stop competing for headlines. Please stop with the botched media interviews” he urged the Coalition’s leaders. He also begged them to stop doing what his fellow senior Sinn Féin colleagues regularly do with enviable success: “Competing as to who will be the first to get to a microphone”.

Stephen Donnelly’s legislation got a qualified welcome from Government backbenchers, who didn’t want to let the side down but needed to express doubts that the proposed quarantine regime would be too lax. They also made sure to put their calls for more vaccination centres in their constituencies on the Dáil record.

Later on, in the make-believe “privacy” of their parliamentary party meetings, the TDs sang loudly from the Cullinane song sheet about communications failings.

If the Government is prepared to gamble its reputation and electoral prospects on the imminent arrival over the hill of the vaccine cavalry, the Opposition stands ready to apportion full blame should that gamble fail.

Politics be damned: this is a bet the people of Ireland dearly want the Taoiseach to win.

But he has to do battle with what Róisín Shortall of the Social Democrats called the “real game changers” – the virus variants. Nothing more than a blanket quarantine policy can keep them out.

“The variants are on tour,” cried Alan Kelly in doom-laden tones.

“The virus is chasing us” and the variants are circulating, warned Richard Boyd Barrett.

The legislation “is not enough. It’s nowhere near enough,” said the Labour leader. “Everyone is talking about it.” The variants are springing up everywhere and could come into Ireland from anywhere.

The stark truth is that we cannot “live beside Covid-19”, no matter what the Government might want people to think. The idea is “a dangerous fantasy. A fatal fantasy.”

Through hard work and sacrifice the people may bring down the infection and hospitalisation numbers but “how can we protect our future hard-won gains if we cannot control our borders?”

Socialist Paul Murphy called selective quarantine measures “the practical equivalent of closing one window in an entire house when all the other windows and the front and back doors are still open”.

But not if a max vaccs programme gets there first.

The Taoiseach is rolling the dice on a roll-out of the vaccines.

He has to win – not just for the sake of his Government, but for all our sanity.