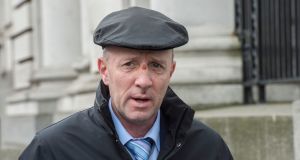 Michael Healy-Rae: Independent TD survived a seven-hour talks marathon on heavy-duty painkillers after being attacked and injured by a calving cow on his farm last weekend. Photograph: Brenda Fitzsimons

Another Good Friday agreement was always too much to hope for, but it would be nice if the government negotiations could finish in time for the summer holidays.

In Kildare Street the talking started before the talk was due to start, delaying the start of the talks.

It was all the media’s fault for lining up outside Government Buildings and forcing the different Independent factions to give lengthy statements before going in to see Enda Kenny.

Before long, a traffic jam built up in the national interest, each group maintaining a dignified holding pattern on the pavement before touching down in front of the microphones.

The 15 Independent deputies and two members of the Green Party were warmly welcomed to the meeting by their Fine Gael pals, who appeared anxious to make them feel comfortable and – imagine it – at home.

Before the Independents sat down to their round-table discussions with the acting Taoiseach and his team of Frances Fitzgerald, Leo Varadkar, Simon Coveney, Simon Harris, Seán Kyne and Eoghan Murphy, they had a nice little meet ’n’ mingle session over tea, fancy sandwiches and dainty pastries.

Each group had requested a private meeting space or “a breakout room” so they could get together to discuss strategy and review progress as the talks unfolded.

Their hosts were absolutely delighted to facilitate them. The various TDs, some of them Dáil first-timers and only one of them, Eamon Ryan, having ever held a Cabinet position, were taken up to the ministerial corridor, where each grouping was given an office to try out for size.

Denis Naughten, part of the Rural Alliance, was billeted along with his four colleagues in the Minister for Agriculture’s rooms.

Naughten, who won plaudits this week for his mature and pragmatic approach to the important task of forming a government, would later tweet: “Is this an omen?”

Michael Healy-Rae and his brother Danny found themselves in the rooms soon to be vacated by James Reilly, although the brothers aligned themselves for much of the time with Mattie McGrath and Naughten’s Rural Alliance, with whom they say they have much in common.

Michael and Danny’s team was a family affair, with their sister Rosemary, a well-known lawyer and tax expert, and Michael’s son Jackie jnr, a councillor in Kerry, forming a Healy-Rae quartet.

It was a case of dedication above and beyond the call of duty for Michael, who made it through the seven-hour talks marathon with the help of heavy-duty painkillers.

He narrowly escaped very serious injury last weekend when a calving cow (a red Limousin) attacked him at home on his farm.

“I was dosed up to the last,” he told us yesterday. “I’m still black and blue all over and terrible sore. It was 700 kilos versus 70 kilos – sure, I had no chance. She stood on every single bit of me.”

Without going into detail, let us just say it’s a miracle that he managed to sit down at all on Thursday.

It was a clever little move to give the Independents access to the famous ministerial corridor.

The significance was not lost on them either. While not giving much away about how they might eventually vote when the election for taoiseach comes around, they liked being cosseted and included.

According to reports, the Ministers’ offices were “suspiciously neat and uncluttered”. This led to talk that there had been “a bit of a clean-out in case we took anything.”

Better still, the 17 Independents were given passes for the elevated glass walkway known as “the bridge”, which begins just outside the main doors of the Dáil chamber and leads directly to the ministerial corridor.

Normally, only ministers and their private secretaries have swipe cards to open that special door into Government Buildings.

Back in the main conference room, consultant Lucy McCaffrey had been drafted in to act as facilitator.

The room was stuffed to the gills with nearly 30 politicians and the same amount – and then some more – of advisers. McCaffrey, who is chairwoman of the Dublin Port Company, runs a company called Latitude.

According to its website, “Latitude is an affiliation of consultants, all of whom share a conviction about people’s innate creativity and resilience and a mastery of innovation and coaching processes that really work”.

McCaffrey is described as “a process consultant with 30 years’ experience of helping clients to think creatively and collaboratively” and a woman who “fosters clarity of thought, quality interactions and a strong sense of common purpose, with a view to organisational and inter-organisational effectiveness”.

One issue, homelessness, had been addressed, to a certain extent. Reports and position papers are being mentioned.

And they haven’t even started on rural affairs. If things don’t speed up, Michael Healy-Rae – half-joking and half in earnest – reckoned that Enda Kenny could get a good year as acting Taoiseach before the talking stops.

Meanwhile, Michael Fitzmaurice of the Independent Alliance bustled away to his car only to find it wouldn’t start.

And so to demonstrate that Independents can work together, he was helped on his way by Kevin “Boxer” Moran and Sean Canney of the Rural Alliance, who used a coat hanger and a set of jump leads to get him on the road.

Finian McGrath, also of the Independent Alliance, couldn’t wait for the final whistle.

“I thought I was going to faint with the hunger. I drove straight to Rocca’s on the Malahide Road for a smoked cod and chips,” he said.

Fine Gael seemed happy with how things went. At least they can’t be accused of not trying to do their damnedest to form a government.

“They all came of their own accord, we didn’t lock the doors and nobody left,” said one adviser.

The other main party’s diffidence, up until now, has not gone unnoticed in Leinster House and beyond.

“We were love-bombed by Enda and the Ministers,” said one of the round-table talkers. “There was nothing about coalition and that sort of thing, it was all about partnership.”

The acting Taoiseach attended most of the sessions, but at one stage he had to leave to meet a delegation from Washington.

The minute the door closed behind him, Leo Varadkar jumped up and grabbed Enda’s “Taoiseach” nameplate, handing it to Simon Coveney.

“Here, Simon, I think you’re looking for this,” he declared, as the rest of the room smirked.

Coveney dropped it like a hot potato, countering: “Look at how quickly Leo made a grab for it!”

(Not that any of them are thinking about the leadership at this difficult time.)

By the way, government formation was very much on Enda Kenny’s mind too, five years ago.

He appointed a negotiation team to have talks with Labour. The members? Michael Noonan, Phil Hogan and Alan Shatter.

Michael McDowell and the strange case of the missing PDs

Leinster House was busier than expected this week. This was down to an influx of Seanad election candidates and their canvassing teams, on the hunt for votes from Oireachtas members.

Election literature from the many hopefuls is flying in.

McDowell is seeking the support of NUI graduates “as an independent member of the Seanad with no party links”.

He has a very impressive CV. Should he get in, he’ll be an erudite and entertaining addition to the Upper House. But here’s the thing: in the long list of his achievements and high offices held, there is one strange omission.

We have scoured the leaflet he has sent to graduates of the NUI, who, unlike mere mortals, are allowed a vote, and nowhere can we find a reference to the Progressive Democrats.

In contrast, John Higgins, also running on the crowded NUI panel and promising “a strong independent community and public affairs voice” has no qualms about mentioning in his list of achievements that he is former general secretary of the PDs.

And so to Tom McEllistrim, who was a Fianna Fáil TD for Kerry North from 2002 to 2011. “Choose young Tommy Mac” says his canvass card.

Young Tommy (pushing 50) has been nominated to the Industrial and Commercial Panel by the Institute of Management Consultants and Advisers.

Apparently he is “committed, determined and focused” and “serious about serving your interests in the Seanad”.

And who might you be? Here’s a clue. Young Tommy has listed his priorities in a series of bullet points.

And, apart from members of the Dáil and outgoing Senators, who might form the bulk of Young Tommy Mac’s electorate as he strives for a seat in the Seanad, a national legislative body?

That would be the councillors of Ireland. If he gets elected, McEllistrim won’t just look after councillors.

He also says he will work tirelessly towards securing city status for the town of Tralee.