Miriam Lord: FF ardfheis is a nightmare on Merrion Road

Irish Times political reporter Sarah Bardon talks to Fianna Fáil members about preparing for a general election at the party's ardfheis in Dublin. 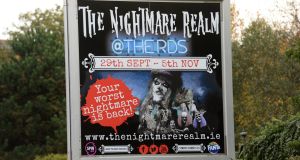 Delegates attending the Fianna Fáil Ardfheis had to choose between the Halloween “scare house” on Simmonscourt Road or the “Ireland for All” hot-air house on Merrion Road. Photograph: Dara Mac Dónaill/The Irish Times

The billboard on the corner wasn’t helpful, confusing visitors before they even set foot inside the door. Pitched on a main junction between neighbouring conference facilities, it presented a conundrum.

“Nightmare Realm at the RDS. Your Worst Nightmare is Back!”

But which way to go? What part of the RDS?

Was it the Halloween “scare house” on Simmonscourt Road or the “Ireland for All” hot-air house on Merrion Road?

In terms of which of these entertainments was the scariest, the advertisement was location neutral. Given the two options, this was perfectly understandable.

However, for observers of the politically paranormal, the Merrion Road event seemed like the best fit as there had been a serious haunting there in January of last year, when Fianna Fáil walked abroad in a pre-election visitation and wailed for two days.

The party materialised there again at the weekend, its restless souls mournfully rattling the constricting chains of confidence and supply which bind them to a heartless government ogre called Fine Gael.

The image on the nightmare poster also held a clue, for it depicted a chilling reimagining of the terrifying ardfheis zombie apocalypse of 2009, when RTÉ’s David Davin-Power was surrounded on live television by a sinister doughnut of spookily silent FF grassroots while he attempted to deliver his report.

Furthermore, the billboard was positioned inside railings at the very part of the RDS being haunted by Fianna Fáil. It was also noted that, from there, people had to take a turn to the right if they wanted to go to the other nightmare horror-fest.

And as Micheál Martin stressed during his Scare Before Bedtime keynote speech on Saturday night, Fine Gael has already taken that turn, spinning along “a new decisive road” with Taoiseach Leo Varadkar’s “big move to the right”. Chains or no chains, the Fianna Fáil leader says he won’t be going anywhere within that direction with Leo.

No. Micheál is heading very decisively in a wobbly straight line with a leftish limp. This allows him to claim that any good decisions or achievements made by the Varadkar government, particularly in the recent budget, have been Fianna Fáil’s doing.

You see, because they are so heavily shackled to Fine Gael until at least the next budget, it means any sudden lurches to the right by the majority party can be corrected by this FF ballast. So therefore, as he explained it, Micheál’s minority Soldiers of Destiny are the real heroes here.

But this scenario is sapping the spirit of Micheál’s party. They weren’t particularly downcast at their conference, but there was a distinct lack of bounce to the event. It’s a wretched time for them as they eye the next election, longing for the freedom to cast off their fetters and take a proper pop at the Government.

The best the party and its leader could do at the weekend was rattle those confidence and supply chains as loudly as possible. But for as long as they complain and attack a government while simultaneously underpinning its power, Fianna Fáil risk looking like fighting fizzbags, with Micheál Martin its fizzbag-in-chief.

He certainly fizzed along last Saturday.

Oh, but the things his party could do if it wasn’t for those painful chains. The policies they could implement (or maybe begin to announce) if that straitjacket was loosened. It’s so frustrating. No wonder they looked haunted.

Still, Micheál put a brave face on things. At least he had the non-confidence and supply related crutch of Leo’s new Strategic Communications Unit to help spice up proceedings. It was a godsend during this ghoulish time and the party leader spent a lot of time and energy excoriating the government for spending so much money on what was clearly a self-aggrandising spin and marketing machine.

For the performance to work, everybody had to suspend their knowledge that the leader of the Opposition and former Fianna Fáil minister of long experience was a dab hand at the spinning in his day.

But that’s the way and he played it well.

But the shoes, though. They were wondrous things. Suedette. And a beautiful shade of blue. Micheál and his blue suedette shoes. Nobody stepped on them, even though they caused quite a stir

On Saturday morning, perhaps hoping for some synergies going forward with the other Halloween-themed event across the road, he almost dressed up as Elvis. Ballincollig Elvis.

Casual shirt and jacket, no tie. And a pair of burgundy red trousers.

But the shoes, though. They were wondrous things. Suedette. And a beautiful shade of blue. Micheál and his blue suedette shoes. Nobody stepped on them, even though they caused quite a stir.

“Were they clogs?” wondered Eugene Murphy, TD for Roscommon-Galway, who only saw them from a distance. “I think they were clogs.”

The same Eugene clearly wasn’t wearing clogs when he soared onto the platform following the leader’s address. Murphy, like many of us, is built for comfort and not for speed. How he beat some of those Leinster House whippets to make the closing credits and hold his boss’s arm aloft was one of the highlights of the night. Particularly as he had to time his run from far out.

Some thought that he might have placed one of those springboards they use in gymnastics at the base of the stage. Well done Euge.

The slogan for the ardfheis was “An Ireland For All”. They could have added: “not just for people who get up early in the morning”, but this wasn’t necessary as the phrase was used constantly as a stick to beat Fine Gael and Leo Varadkar’s favoured demographic.

Fianna Fáil wants an Ireland for all, except for thousands of Irish woman every year who become pregnant but don’t want to be pregnant

Fianna Fáil’s Ireland For All was drawn as a jigsaw island. Around the hall, individual jigsaw pieces hung from the ceiling, announcing the diverse measures the party will introduce if in government. They will slot them together, taking in all strands of society and not just the early risers.

However, after delegates voted overwhelmingly for the retention of the Eighth Amendment to the Constitution, which relates to abortion (a result at odds with recent polls showing that the majority of voters want it repealed), the party will have to go back to the printers.

Their smart new logo needs to be redone for the sake of accuracy.

Micheál Martin’s party will have to remove a large piece from its fancy jigsaw map, along with its false claim, and change the image and slogan to reflect the truth: “Fianna Fáil: Not an Ireland for All”.

The map didn’t feature in the scenery for his keynote address, but neither did the Eighth Amendment. The backdrop on the curved screen in the main auditorium looked impressively hazy, which was a neat way of summing up the leader’s speech.

It was a kind of light purple haze, with sketchy skeletons of buildings and bridges darkly misting beneath. A vaguely post-apocalyptic landscape, perhaps in a nod to the Nightmare Realm. This was complemented by Micheál’s big entrance.

Music from the Imagine Dragons blared forth. All very Game of Thrones.

Lightning then the thunder,

Ah here. Maybe he shouldn’t have had the beans and curry for tea.