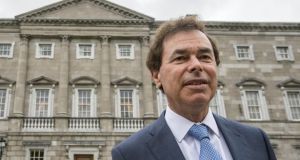 The unsinkable Alan Shatter. Did he lay an egg along with everything else? Is there no end to the man’s talent? Photograph: Brenda Fitzsimons

Social distancing is a terrible imposition on the professional flesh-presser. They are doing their best to cope in Leinster House.

But political distancing? That’s no bother at all. How far? How wide? For how long do we hold our noses before settling down in government with the crowd we dislike the least?

At the beginning of the week, the work of the much trumpeted 19-member Covid-19 Committee fizzled to an undistinguished start. Due to an unexpectedly robust outbreak of political distancing, members of the CoCo 1919 spent all day bickering behind closed doors, before eventually reaching an accommodation on their working arrangements.

One bone of contention was the choice of witnesses for next week’s opening hearing. Despite passionate arguments from terribly miffed Fine Gael TDs against the non-inclusion of their illustrious leader Leo Varadkar in the line-up for the high-profile first meeting, the list remains confined to the country’s three most senior health officials.

Working arrangements are a major preoccupation of the Dáil’s complement of political distancers. Like spoilt toddlers on the look-out for sharp practice when the sweeties are doled out, TDs and political parties are instinctively vigilant to the threat of being short-changed by political rivals.

“Not fair. They got more than us!”

This is why the Business Committee, with its power to divvy out speaking time and schedule debates, holds more intense sessions in private than your average episode of Normal People.

Deputies who sit on it are well used to receiving urgent summonses to discuss overturning their latest decision because the colleagues who delegated them to make it have suddenly decided they don’t like it anymore.

The Divvy-out Committee had already agreed the schedule for this week’s two sittings when the House reconvened, but a blast from a tenacious politician past soon upset the plans.

And by teatime the members were back in conclave.

Included in their running order for Thursday was a motion to strike the Guerin report from the Dáil record. The report, commissioned by Enda Kenny’s government in 2014, found that then justice minister Alan Shatter mishandled Garda misconduct allegations. The unsinkable Shatter embarked on a successful legal campaign to clear his name, and a Supreme Court ruling sealed it.

The motion to remove the report from the Dáil library was tabled at the behest of the Taoiseach and the Ceann Comhairle in light of the judgment. The Business Committee agreed it would be taken without debate. Sinn Féin’s Aengus Ó Snodaigh was firmly against the move but he was outvoted.

When it came up for mention on the floor of the Dáil on Wednesday, the TD for Dublin South Central expressed his reservations again. This time he got a torrent of support, and when the time came for TDs to rubberstamp the committee’s Thursday schedule (including the now heavily questioned Shatter motion) they voted to scrap it.

The long-suffering Ceann Comhairle sighed heavily, and called an urgent meeting of his Business Committee for later in the afternoon, otherwise there would be nothing to do or talk about the next day.

If he was looking in, Shatter, a controversial figure when he was minister, must have been feeling very hard done by. Are his erstwhile parliamentary peers so bitter they would rather overlook a Supreme Court judgment than allow him justice in parliament and an admission that he was right? (A concept Shatter never had any difficulty with himself throughout a long political career.)

But this was nothing personal. It wasn’t about Alan. It was to do with procedure and precedent.

“I don’t have any problem with the court judgment in relation to the Sean Guerin report. People might recall what that is – it was a vindication of former deputy Shatter,” explained Ó Snodaigh, who, while never the former minister’s biggest fan, was not trying to do him down.

But, as Brendan Howlin so delicately put it: “You can no more un-lay a report than a hen can un-lay an egg.”

What’s this got to do with eggs?

Did Shatter lay an egg along with everything else? Is there no end to the man’s talent?

No. Varadkar laid the un-laying egg out of the blue, and then the Ceann Comhairle agreed to sit on it. Deputies were very surprised when they found out. They were taken aback, and expressed concern about this very unnatural idea of un-laying something which has already been laid in front of them.

Then there was the whole other story of trying to pass a motion while reversing the laying process.

Can it be done at all, wondered TDs on all sides? They demanded more time to work it out. It would be an unconscionable strain on the democratic process otherwise.

“Our legal advice is that the motion before the House can un-lay the laid report. I know you can’t put the egg back after it’s been laid,” clucked Seán O’Fearghaíl, looking a bit broody after the Business Committee’s best laid plans were lying on the chamber floor in smithereens, like Humpty Dumpty.

Ó Snodaigh said the committee had no legal advice regarding the motion, and there seemed no reason or justification for this sudden urge to rush through the un-laying of the Shatter egg.

Withdrawing a report from the Oireachtas library has never happened before, he continued. Furthermore, the act requires the involvement of the Seanad, which currently only exists in the form of an unfertilised egg and won’t be pushed out anywhere until a new government is formed.

“So I think we are being previous on this,” concluded Aengus, to the general agreement of all but the few Fine Gael TDs present.

Social Democrat Catherine Murphy talked about the “specific” and the “general”.

The majority of Deputies have no issue with the specific case involving the unlaying of the Shatter-shaped egg but “it’s the consequences or the unintended consequences that could follow on from doing this” which were causing concern.

Government chief whip Peter Burke stressed “natural justice” should not be denied any former member of the Dáil. “This issue was discussed at the Business Committee and has been in gestation for a while.”

Sticking his beak in

Meanwhile, one of Shatter’s successors in Justice flapped into the chamber. Charlie Flanagan was like a hen on a hot griddle, anxious to stick his beak in.

The motion was fully in order, and he took exception to Catherine Murphy’s remarks about “unintended consequences” when it was simply addressing the “result of misrepresentation, innuendo and debate of some years ago”. Her “further accusations” were unfounded.

Murphy, nonplussed, repeated she has no issue with removing the Guerin report, but just wants to be sure it does not spark attempts to have other reports removed from the record.

“What are the unintended consequences? Everything is a conspiracy for you,” roared the Minister.

She told him TDs merely wanted to make sure things are done right from a legal perspective.

But there was no convincing Charlie.

“It’s a daily conspiracy,” he squawked, politically distancing himself from the Social Democrat’s co-leader.

The House agreed by a large majority to reject Thursday’s timetable and the motion was thrown out, for now.

It’ll be back though. Sure as eggs is eggs.