Miriam Lord: A breath of fresh air with a volcanic name 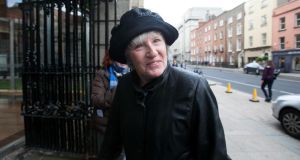 Ethna Tinney. How did that woman get on to the board of a major financial institution? What were the lads thinking?

Wouldn’t you think the banking hotshots might have noticed the clue in her name? (Although, for all their massive bonuses, it turns out they weren’t very good at spotting things at all. Things like how not to let your businesses go down the tubes.)

There was bound to be something volcanic about a woman called Ethna.

The guys did say at the time how she got “upset” over decisions they were making. There were outbursts. “Intemperate outbursts” as the woman with the volcanic-sounding name conceded at the banking inquiry.

Some might say she showed remarkable restraint by not resorting to physical violence. Her account of how business in the EBS was conducted when the economy was combusting was depressing, but very recognisable.

Tinney, a radio producer and classical pianist of renown, responded to a notice in The Irish Times seeking applications from members of the building society for the position of non-executive director. This was in the year 2000. She was successful.

One suspects the suits who ran the concern (into the ground) still rue the day.

Tinney was a rarity at the banking inquiry. She spoke plain English, was free of corporate jargon and, one suspects, deathly accurate on the modus operandi of the dealmakers who bolstered themselves and the like-minded lads who spoke their boardroom lingo all the way to business oblivion.

She was a breath of fresh air compared with all the bankers who have rolled into the committee to delight their dozing audience with familiar nuggets of corporate jargon.

In a nutshell, John was very much “across the situation” regarding the bank guarantee and the lead-up to it, even though nobody in government appeared to tell him anything. If it hadn’t been for celebrity economist David McWilliams telling him stuff that Lenihan told him but didn’t tell Gormley, he wouldn’t have known a thing.

However, he was proud “of the dignified way the Greens conducted themselves at this time of adversity”.

As for Harney, she gave a strong defence of the Progressive Democrats’ role as junior coalition partners when Fianna Fáil’s Michael McGrath wondered if her party’s ideological outlook had “a disproportionate influence” on the Fianna Fáil-led government?”

Both Harney and Gormley said there was little they could do when the banking crisis hit – it happened so fast. As for recognising the signs that disaster was on the way, former tánaiste Harney pointed out that her department – enterprise, trade and employment – “only had the equivalent of half an actuary”.

Gormley repeated what other members of that bailout government said about their decision to guarantee the banks: it was the “least worst option”.

He mentioned people who say they should have stood up and refused to do it. “Well, we did stand up, but there are times where you have to use your political smarts and know when you’re beaten.”

This was an unprecedented situation, Gormley said, and they had to take the most palatable decisions. “In an ideal world, if we could clone Joe Higgins and create 90 Joe Higginses and you had a majority in government, I’m telling you now that your room for manoeuvre would be limited in a crisis like this, you would have to make terrible decisions . . . it’s something you don’t want to do it, but it’s forced on you.”

Genius. Another stunning insight we would never have known were it not for the banking inquiry.

But back to Ethna, dripping lava over the banking professionals who were running the show in the EBS.

Unlike Harney’s department, the EBS was rolling in accountants, actuaries and the like. Not that it made any difference.

The erupting Ethna, who was turfed off the board for a year because she was seen as a “nuisance” and then re-elected after the crash when it turned out she was the one talking most sense, was preceded by Alan Merriman, a former EBS finance director, who talked about things on a “granular” level.

He was recruited in 2005 from PricewaterhouseCoopers, where he had been very happy and “privileged to have practically all the Irish banks” amongst his client base.

“Nevertheless, having been courted by EBS, I was eventually convinced to leave, attracted by the opportunity of testing myself in industry and by the wider challenge of ongoing professionalisation of the society and, of course, championing mutuality.”

He gave convoluted explanations of EBS policy at board level and talked around the institution’s explosion in lending.

Ethna, on the other hand, was far more illuminating. “There was a lot of testosterone rolling around in senior management and on the board at the time,” she said. It seems the guys were concerned that another building society, Irish Nationwide, was stealing a march on them.

But sure what would Ethna know? She may have been making a lot of sense to people watching at home, but what would they know? Housewives, probably, with too much time on their hands.