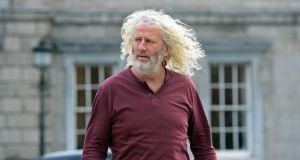 Ministers failed to agree a Government position on a Bill proposed by Independents 4 Change TD Mick Wallace, and they then adjourned. It is expected they will meet again before the Bill, which aims to legalise terminations in cases of fatal foetal abnormality, reaches the floor of the Dáil. File photograph: Eric Luke/The Irish Times

The Cabinet was divided on Tuesday on the question of abortion, with Independent Ministers refusing to agree to oppose a Private Members’ Bill on Thursday that aims to legalise terminations in cases of fatal foetal abnormality.

Ministers failed to agree a Government position on the Bill, proposed by Independents 4 Change TD Mick Wallace, and adjourned. It is expected they will meet again before the Bill reaches the floor of the Dáil on Thursday.

The Attorney General has advised Ministers that the Bill is unconstitutional, contravening the provisions of the eighth amendment, which recognises the equal right to life of the unborn and the mother.

Both Fine Gael and Independent sources say they expect a compromise to be reached before the debate on Thursday.

This would enable Minister for Health Simon Harris to outline an agreed Government position in opposition to the Bill. However, for the Independents to allow the Government to oppose the Bill, they will require a free vote on this motion, enabling some to abstain. “We might not vote for it, but we wouldn’t have to vote against it either,” said one Independent.

Allowing Ministers to abstain on a vote proposed by the Government is highly unusual. However, the Independents say that this specific issue is not covered by the programme for government, and say they have previously voted for an identical motion proposed by Independent TD Clare Daly.

Independent Ministers know they are bound to support decisions of the Government under the programme for government, but also know that if they refuse to agree at Cabinet, the Government will not be able to come to a collective position.

However, sources on both sides say they will not let the disagreement bring down the Government, and further talks are expected on Wednesday.

While the Government has refused to publish the Attorney General’s advice, in accordance with precedent, The Irish Times understands it unequivocally states that the Bill proposed by Mr Wallace is unconstitutional.

The Government has already agreed to set up a citizens’ assembly to consider the abortion issue.