Minister queried could he dock all striking teachers’ wages 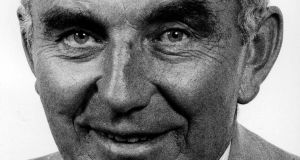 The minister for education wanted to know whether he could legally dock the entirety of teachers’ wages if they went on strike for three days a week, according to documents in the State papers.

Patrick Cooney wrote to the attorney general in May 5th 1986 for advice on how to handle the payment of wages during a teachers’ pay dispute that year.

The teachers had rejected a £35 million (€44.4 million) pay offer, according to reports at the time.

Documents on a file from the attorney general’s office, released by the National Archives, show Mr Cooney asked whether, in the event of teachers taking strike action for three days, over a four-week period, he could “disallow all salary from the date of commencement” of the strike action until the resumption of normal service.

He also wanted to know if, instead, he could only allow salary for “days of actual service”.

At the time, a teacher’s weekly wage was calculated on a seven-day basis and absence for three days would have meant the loss of 3/7ths of a wage.

Mr Cooney queried whether he could just pay 2/7ths of a wage instead of 4/7ths in the event of a three-day strike.

He also wanted to know if picketing of examination centres by teachers would be legal, and if not, what action he could take.

Then attorney general John Rodgers advised that if the teachers staged a full-time strike, then no salary at all would be payable, even during summer holidays if the strike lasted up to that time.

But the minister would not be entitled to disallow salary for days when teachers actually worked.

“I consider that there would be substantial legal difficulties in withholding salary in respect of days when the teacher presented himself for work but, not having been suspended or removed from office, was not allowed to work unless, in effect, he gave an undertaking not to participate in a future strike,” Mr Rodgers said.

On the issue of what percentage of their weekly wage should be paid to teachers if the strike was for three days, he said calculations of wages form part of a contract and “cannot now unilaterally be altered by the minister”, meaning 4/7ths would have to be paid.

Mr Rodgers also said in all probability teachers could legally picket examination premises, even if they were not where they worked.

If the picket was found to be illegal, the minister could seek an injunction, but once granted, it would be unwise not to enforce it and there had to be “a firm resolve to see the case through to the end”.

The strike was settled on May 17th. Teachers accepted the £35 million offer as a temporary agreement, and said they would consider further strikes later in the year.