Speaking in Brussels ahead of a meeting for EU leaders, An Taoiseach Enda Kenny, expresses sympathy with migrants and draws comparisons to Ireland's history. Video: EU Council 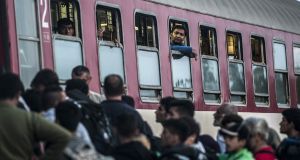 Refugees and migrants board a train heading to Serbia near the Macedonian-Greek border on Thursday. Photograph: Getty Images

There is solid backing for the Government’s offer to accept 4,000 refugees, but a significant minority of voters believe the number is too high, according to the latest Irish Times/Ipsos MRBI poll.

Wealthier voters are most strongly in favour of accepting more refugees while poorer voters tend to say Ireland is taking too many or should not have offered to get involved.

There was less support for the move in Dublin than any other region, but the most significant difference in opinion was across the social classes.

Among the wealthiest AB voters, 75 per cent said the number was just right or that the offer should have included more than 4,000 refugees.

Those aged over 65 were most supportive of taking in 4,000 refugees while there was an even spread of opinion across other age categories.

Fifty per cent of Fianna Fáil voters said the offer was right and 9 per cent said it should have been more generous.

The survey was undertaken this week among a representative sample of 1,200 voters in face-to-face interviews at 100 sampling points in all constituencies. The margin of error is plus or minus 2.8 per cent.