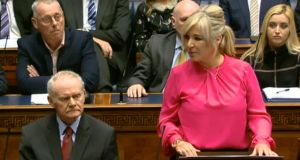 Video grab taken from the Northern Ireland Assembly of Michelle O’Neill speaking during an plenary session at Stormont earlier this month.

The North’s Minister of Health Michelle O’Neill was confirmed as Sinn Féin’s leader in Northern Ireland on Monday and is now in line to be the North’s next Deputy First Minister – or even joint First Minister depending on the result of the election.

Sinn Féin president Gerry Adams made the announcement in the Long Gallery of Parliament Buildings, Stormont, this afternoon.

Also present were Martin McGuinness, who last week confirmed he would not be standing in Foyle in the Assembly elections in March, and TD Mary Lou McDonald, seen as a potential successor to Mr Adams when he stands down.

Mr McGuinness, in handing over the baton, described Ms O’Neill “as a young woman of incredible ability who has risen to the leadership of Sinn Féin in the North”.

Mr McGuinness said he was just standing down from Foyle and not retreating from politics. “I have not gone away, you know,” he told supporters in the Long Gallery.

Ms O’Neill, a former local councillor, has been an Assembly member for Mid-Ulster since 2007. She is currently Minister for Health, a position she will hold until the election on March 2nd, and was a former minister of agriculture.

From Clonoe in Co Tyrone, Ms O’Neill is a 40-year-old Sinn Féin career politician whose appointment marks a break with the past. The other chief contender for the post, Conor Murphy, who for a number of years was viewed as Mr McGuinness’s likeliest successor, is from south Armagh.

A senior Sinn Féin negotiator, he joined the IRA during the hunger strikes in 1981. The following year he was sentenced to five years in prison for IRA membership and possession of explosives.

Ms O’Neill, unlike Mr Murphy, does not have an IRA past, a factor viewed as significant. The fact that Mr Murphy was overlooked for the post seems to cement the point made by Mr McGuinness last week that he was handing over to a “new generation of republicans” the responsibility of leading Sinn Féin into the election campaign and the expected negotiations thereafter.

Since the crisis over the flawed Renewable Heat Incentive (RHI) erupted before Christmas, Ms O’Neill was given a lead role in arguing and defending Sinn Féin’s position. She is viewed as friendly, personable, articulate, well-briefed and confident in debate.

Ms O’Neill is married to Paddy O’Neill and they have two children, son Ryan and daughter Saoirse. She is a daughter of Brendan and Michelle Doris.

Her late father, a former IRA prisoner and Sinn Féin councillor, encouraged her political career. In 2005 she was elected to her father’s seat on Dungannon and South Tyrone Borough Council in 2005. She was the first female mayor of Dungannon in 2010. Her mother and children and brother Brian were at Stormont for the announcement.

Ms O’Neill has worked in the Assembly since 1998 where she was political adviser to Mid-Ulster MP and former MLA Francie Molloy.

As Minister for Health, a post she took up in May last year, she has been involved in trying to overhaul Northern Ireland’s health service. One of her biggest challenges was trying to get to grips with the mounting hospital waiting lists. In late October she launched her 10-year “vision” for a “radical transformation” of the current health and social care system which she said was now at “breaking point”.

Her plan, “Health and Wellbeing 2026: Delivering Together”, was based on the 10-year “roadmap” proposed by an expert panel led by former Basque country minister for health Prof Rafael Bengoa.

Ms O’Neill also warned that if action wasn’t taken, health eventually would eat up 90 per cent of the Northern Executive’s budget. She launched the plan less than three months ago when relations between the DUP and Sinn Féin seemed positive.

She said the plan and the Bengoa report had the full support of the DUP/Sinn Féin-dominated Executive. She said she would report to the Assembly every six months on how the 10-year “roadmap” was being implemented. “This is a positive day, this is a fresh start for health,” she said.

Ms O’Neill was appointed minister of agriculture and rural development in 2011. She was caught in controversy when the following year she announced her department was moving to a former British army barracks in Ballykelly, Co Derry.

It later transpired that Strabane was chosen as a more suitable location in an internal departmental assessment but that this was overruled by Ms O’Neill. The former DUP finance minister Sammy Wilson also questioned her decision.

Ms O’Neill is a GAA enthusiast and a member of her local club, Clonoe O’Rahilly’s.