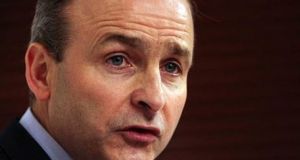 Taoiseach Micheál Martin faced scathing criticism from a number of his TDs at a Fianna Fáil parliamentary party meeting on Wednesday night.

Some TDs condemned his defence of Fine Gael leader Leo Varadkar after the Tánaiste admitted passing on a confidential document negotiated with the Irish Medical Organisation (IMO) to the president of a rival GP group last year.

At the meeting there were heated exchanges between Mr Martin and Sligo TD Marc MacSharry, who said party members were angry seeing the Taoiseach acting as “chief flag-flyer for Leo”.

Mr MacSharry contended that Mr Martin’s meeting with the Tánaiste on Saturday when the controversy over the leak broke was to conceive a plan to “protect the sacred cow – Leo”.

“[The Tánaiste] went into the Dáil yesterday [Tuesday] and gave a fairytale account of events when there is not a six-year-old in the country who doesn’t know the real story,” Mr MacSharry told the meeting.

When Mr Martin confronted Mr MacSharry and told him the tone of his criticism was very personal, Mr MacSharry retorted that if he could not take the criticism, he “should not be leading the party”. In exchanges, he also claimed Mr Martin had “dragged the party down” to 11 per cent in opinion polls.

The Sligo TD was one of a small number who criticised the manner in which Fianna Fáil had defended Mr Varadkar, and contrasted it with the cases of two former Fianna Fáil ministers for agriculture, Dara Calleary and Barry Cowen, who each lasted only weeks in the job this year.

Among those who criticised Fianna Fáil’s role in the current controversy were Tipperary TD Jackie Cahill and Mr Cowen, who was sacked as minister for agriculture in July.

At Wednesday night’s meeting, Mr Cowen berated the media for the way they have “lampooned and lynched” politicians. He said Mr Varadkar was given due process however. In contrast, the Offaly TD said he did not get due process from Mr Martin and was sacked.

In his response, Mr Martin pointed out that Mr Varadkar had been willing to take questions in the Dáil but Mr Cowen would not go before the Dáil to answer questions.

Mr Cowen had been sacked by the Taoiseach after refusing to make a second public statement about a driving ban imposed on him four years ago.

Addressing Fianna Fáil TDs and Senators, the Taoiseach said it was now time to move away from the leak controversy and to focus on the bigger issues such as Covid-19, health, housing, climate change and jobs.

He also confirmed the Level 5 coronavirus lockdown would last a full six weeks.

Fine Gael leader Leo Varadkar, who apologised in the Dáil on Tuesday for “errors of judgment” after leaking the draft €210 million contract agreed with the IMO to his friend Dr Maitiú Ó Tuathail, who was the then president of the rival National Association of General Practitioners, said his sole aim had been to get greater support for the deal among family doctors.

Mr Varadkar on Wednesday night warned TDs and Senators in his party at a Fine Gael parliamentary party meeting to “be careful who you think your friends are” in a world where politics was becoming “nastier” by the day.

He said he did not believe he had any more questions to answer on the leaking of the document, but thanked the party for its public support.

He said it was the first time in almost 10 years where he had had to be cross-examined in the Dáil and said it was not a pleasant experience.

His comments come as Independent TD Mattie McGrath submitted an official complaint to the Dáil’s Committee on Procedure and Privileges over the controversy. In the letter Mr McGrath said that “the Rural Independent Group believe this entire fiasco has caused irreparable damage to our democracy, the Oireachtas, and the Irish public service, while also undermining a sensitive industrial relations process”.

Ahead of Wednesday night’s Fianna Fáil meeting, Mr MacSharry had expressed his unhappiness with the way in which party had handled the matter.

“As an individual member of the Fianna Fáil parliamentary party, I am appalled that without any debate internally in the party we have essentially said ‘Yes sir, yes three bags full Leo’ and said to him there is one set of rules for us and no rule for you.”

Referring to the copy of the draft GP contract sent by Mr Varadkar to Dr Ó Tuathail, Mr MacSharry said it was a “confidential document and not for circulation”.

Dublin Bay South TD Jim O’Callaghan criticised the “complicated and contorted narrative” he said was constructed by Mr Varadkar, and which he said did not stand up to scrutiny.

“My view is that that the Tánaiste’s motivation is irrelevant. If a civil servant had disclosed a confidential document they would have been in very significant trouble,” he said.

Mr Varadkar insisted his only motivation was to get the deal accepted by GPs, and said he had nothing to gain.

Mr O’Callaghan, speaking on RTÉ radio, said it was “important Fianna Fáil calls out something when it’s wrong”.

He said: “We don’t shy away from it because of political convenience. That is an important point that needs to be emphasised.”

Mr O’Callaghan said he had not seen too many Fine Gael TDs come out to defend Mr Cowen or Mr Calleary. A Fine Gael spokesman later pointed out Minister for State Damien English had defended Mr Cowen on radio.

Minister of State Niall Collins was one of the Ministers who defended Mr Varadkar’s response to the controversy.

“The Fianna Fáil position is very clear,” he told The Irish Times. “What Leo Varadkar did was wrong. We accepted the explanation on motivation and why he did it.

“Fianna Fáil could not have stayed silent to on this. We were going to be asked to appear on the media and could not go into hiding on it.

“People have said the treatment of Barry Cowen and Dara Calleary were different but Barry himself has said that the circumstances of his case were very different.

“We are in a coalition government and that means we have to as a party face the choices and consequences that involves.”