Michael O’Regan’s crystal ball: What happens after the count? 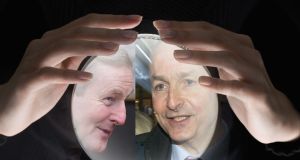 Michael O’Regan looks at what might happen over the next few weeks.

The people have spoken – but what does it mean? Once the tallymen go home, all the votes are all counted and recounted, the seats are called, and candidates have been raised on shoulders, what next? With no clear majority party emerging, how could attempts to form a government unfold over the next few weeks?

Michael O’Regan has taken out his imaginary political crystal ball and has come up with a few possibilities.

*March 10th: New Dáil meets. Enda Kenny, Micheál Martin and Gerry Adams are proposed and seconded for taoiseach but nobody has a majority. Labour supports Kenny, given the previous coalition arrangement.

*There is political stalemate and much talk of another election.

*Intense public and media pressure on Fine Gael and Fianna Fáil to come together, given the only other option is an election nobody wants.

* Sinn Féin calls on the two “conservative’’ parties to come together. Public tolerance of the stand-off is waning.

* Tentative negotiations between senior people within Fianna Fáil and Fine Gael begin to explore what can be done in the “national interest’’.

* Full blown talks get under way and policy documents are exchanged.

*Kenny and Martin become involved in the talks and policies are agreed. A rotating taoiseach arrangement is agreed whereby Martin will assume the office in mid-term when Kenny retires.

*Martin goes to the special Fianna Fáil ardfheis and gets the go-ahead to enter coalition when he tells the delegates, to loud applause, that the party is entering government from a position of strength. There is more talk about the “national interest, which Fianna Fáil has always put first’’.

*Some grassroots members very unhappy, but they are a small minority.

*Kenny and Martin divide up the ministries, which was informally done weeks earlier.

*The two party leaders have a joint press conference where they talk about Civil War politics being buried forever. There is talk of the difficult decision both parties had to make and further references to the “national interest’’ being foremost in the centenary of the 1916 Rising.

*The Dáil meets and the new government is elected.

*By now it is close to Easter but in plenty of time for Kenny and Martin to participate in the GPO Easter Sunday ceremony.

*They may, or may not, live happily ever after.