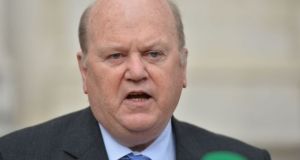 Michael Noonan: “I will be attending Cabinet on January 5th and I look forward to contesting the upcoming general election.” Photograph: Alan Betson

In a statement, Mr Noonan said: “Two weeks before Christmas I attended my doctor and was diagnosed with an infection involving fluid in the chest area.

“I subsequently underwent some medical procedures and am now well on the mend. I will be attending Cabinet on January 5th and I look forward to contesting the upcoming general election.”

The 72-year-old has committed to contesting the general election in Limerick city.

He has also insisted he wants to be returned to the Department of Finance if the party is re-elected to government.

In a recent interview, the Minister said he gave no consideration to standing down.“I’m after five budgets now and it’s for the public to judge, but from my perspective the country is more or less sorted out again now.

“The job now is to keep the recovery going – so I would like to spend another couple of years to make sure the recovery continues to go forward,” he said.

The Limerick TD has suffered from a number of health scares in recent years. In late 2007 he underwent a successful heart bypass operation.

Mr Noonan was diagnosed with a sarcoma on his right arm in 2014 and had to undergo surgery. He was told the prognosis was good, with a low risk of recurrence. Earlier this year he underwent surgery for exophthalmos (bulging) of the eye.

Mr Noonan is one of the longest serving members of the Dáil and the second oldest member of the House.