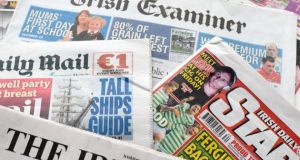 New media mergers guidelines have described a holding or voting strength of over 20 per cent as constituting a significant interest in a media company.

New guidelines will give the Minister for Communications power to decide if a proposed media merger is in the public interest in terms of diversity and plurality.

The media merger guidelines were published by Minister for Communications Alex White on Wednesday and set out steps to allow the Minister decide whether a merger is in public interest.

In the first instance, the size of the holding a party has in any media business will be considered. The key criteria will be a “significant interest” giving the party sufficient voting, financial or ownership strength to influence the direction of policy of the media business, particularly its news current affairs and cultural content.

The guidelines put a value on “significant interest” for the first time.

This is described as a holding or voting strength of over 20 per cent although the guidelines note in some circumstances a holding of between 10 per cent and 19 per cent may constitute a significant interest.

As he announced the guidelines, Mr White said: “Media plurality is essential to the health of our democracy.

“The guidelines I’ve published today outline how I will apply the relevant criteria when assessing the impact of a proposed merger on media plurality.”

The final guidelines do not differ substantially from the draft guidelines published last year.

There are new protections, however, for the Irish language and a requirement that members of the advisory panel have specific knowledge of the area.

Under the guidelines, if the Minister is concerned the merger may be contrary to the public interest in protecting plurality of the media in the State, a request is made to the Broadcasting Authority of Ireland (BAI) to carry out an examination under section 28E of the Act.

Because of the increased fragmentation and diversification of media, the definition of the industry incorporates printed, broadcast and digital material.

The guidelines come at a time when there is speculation that Independent News and Media (INM), which is controlled by businessman Denis O’Brien, may be interested in acquiring TV3 which is for sale.

The Department received 14 submissions during the consultation phase. Those who made submissions included The Irish Times, the National Newspapers of Ireland, the BAI, UPC, ICTU, Sinn Féin and the independent TD Thomas Broughan.

There were no submissions from either RTÉ or from INM.