Discrimination and alienation suffered by LGBT developed ‘largely by invention’ 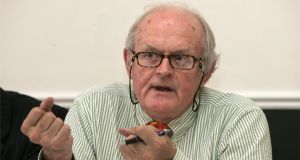 Journalist Bruce Arnold said as an “officer of the State” the former president had broken convention by taking part in the same-sex marriage debate and abandoned her duties. Photographer: Dara Mac Dónaill/The Irish Times

Former president Mary McAleese was wrong to call for families across Ireland to vote Yes in the same-sex marriage referendum, according to journalist Bruce Arnold.

Speaking on RTÉ radio, Mr Arnold said as an “officer of the State” the former president had broken convention by taking part in the same-sex marriage debate and had abandoned her duties.

“She has been the head of State and it is as convention followed by heads of state, all through the years, that they do not speak out after their term ends on any matter that affects the public.

He said convention stated a former head of state should consult with the Taoiseach before speaking publicly, adding that “history does matter and convention matters”.

Mr Arnold said since his arrival in Ireland sixty years ago, a “penalised, unhappy, disfavoured, disadvantaged, interpretation of homosexual couples” had developed, “largely by invention”.

According to Mr Arnold, when he moved to Ireland homosexuality was not penalised or illegal and “homosexuals lived a reasonably open and happy life”.

“Several people have repeatedly said homosexuality was illegal and was decriminalised by Máire Geoghegan Quinn in 1993,” said Mr Arnold. “This simply isn’t true.”

“Homosexuality was never a crime in Ireland. Homosexual acts were and through David Norris’ work with Mary Robinson in Europe the edict was created that made the government here reluctantly, and with disagreement, decriminalise homosexual acts.”

“Bruce is speaking to an older society and an older view of the world. The world evolves and changes and so does society”.

Mr Martin said it would be “absurd” to silence the former president and prevent her from taking part in the same-sex marriage debate.

“The idea that we would silence a woman of the passion and intellect of Mary McAleese, and who has precious insights of what it means to rear a gay child, and from a Catholic perspective, I think is quite absurd.

“It would be undermining our sense of democracy and full participation of all citizens in the debate, to say that such a woman should be silenced.”