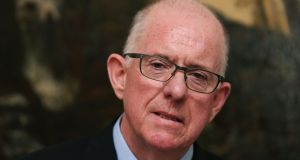 Charlie Flanagan: he said he had discussed the consolidation of road traffic legislation with Minister for Transport Shane Ross

Minister for Justice Charlie Flanagan has said he intends to change the way the District Courts works so that the public can have greater confidence in its operation. He said he was keen to reform the court given it was the court of first instance for most, and dealt with matters relating to hundreds of thousands of Irish citizens annually.

Mr Flanagan was responding in the Dáil on Tuesday to an RTÉ Investigates programme which highlighted examples of donations to the court poor box being applied in lieu of convictions in the cases of defendants charged with offences such as dangerous driving.

The programme also revealed that only 48 per cent of those driving with excess alcohol coming before a court were convicted.

“I take very seriously the outcome of the RTÉ programme last night, and I will advise the House accordingly in the new year of the options available to me in terms of the review,” said Mr Flanagan.

He was very concerned about the “inconsistent’’ operation of the court poor box. He wanted to recognise the separation of powers, and that sentencing was exclusively a matter for the courts and the judiciary.

The Minister said he had recently met the president of the District Court, Judge Rosemary Horgan, and Attorney General Seamus Woulfe. He acknowledged that there were certain pressures on the District Court system which, by and large, had remained unreformed since the 1920s.

Mr Flanagan said the recent Criminal Justice Act 2017 had broadened the factors the court was required to take into account when granting bail. If the legislation did not deal with the issue in the manner intended, the bail laws would be reviewed.

He said the legislation went back to the 1960s and even prior to that.

Fianna Fáil leader Micheál Martin said the number of people being murdered and killed by people out on bail was growing alarmingly. “There is a fundamental malaise at the heart of the system.’’

Sinn Féin justice spokesman Donnchadh Ó Laoghaire said the RTÉ programme had highlighted the inconsistencies and discrepancies in the decisions made by judges relating to sentences.

Fine Gael TD Fergus O’Dowd said the revelations relating to convictions for driving with excess alcohol in the programme were quite shocking. He was speaking during the resumed debate on the Road Traffic (Amendment) Bill which provides for a mandatory ban for all motorists driving over the alcohol limit.

Mr O’Dowd said in the past year 382,000 criminal offences, 134,000 civil cases and 36,000 family law cases had been brought before the courts. The courts also had to deal with some 60,000 fines, while a total of 284 District Court orders were made. “A huge volume of work is going through our Courts Service.”