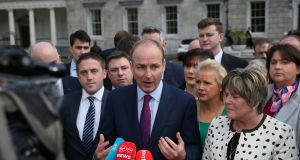 Fianna Fáil leader Micheál Martin has confirmed he will ask Fine Gael leader Leo Varadkar to engage on government formation talks, insisting that nobody has a “pathway to opposition”.

Mr Varadkar has said the Fine Gael party will go into opposition and would enter government only as a last resort, if required to provide political stability.

“I will be saying to Leo Varadkar after today ... saying you and the Fine Gael party need to engage,” Mr Martin said on Thursday.

Fianna Fáil is due to hold talks with the Greens and Social Democrats next week.

Mr Martin also outlined, once again, his opposition to working with Sinn Féin. “The issues with Sinn Féin are quite fundamental. Their structures are problematic in terms of those who control the levers of power,” he said.

He said there was also a fundamental incompatibility between the two parties because of elements of the Sinn Féin manifesto.

“Their manifesto, which escaped a lot of scrutiny, does not stack up at all. It was something that harks back to a different era.

“We need to get back to terra firma in relation to what this result means.”

He said he would meet other parties to try to find a common policy platform, adding that a different approach to politics must be found.

There needed to be an urgent change of direction on health, housing and climate change, he added.

Speaking outside Leinster House alongside his parliamentary party, Mr Martin did not address questions about the concept of a rotating taoiseach.

There has been speculation that a so-called “grand coalition” between Fine Gael, Fianna Fáil and other parties would mean a rotating taoiseach would be agreed between party leaders.

Sinn Féin leader Mary Lou McDonald said Fine Gael and Fianna Fáil, but Fianna Fáil in particular, had decided in “an arrogant, dismissive, self-righteous way to disregard entirely the representative of more than half a million people”.

She said she did not really care what Mr Martin thought about her party. But she said what she would not tolerate was the “grossly offensive” suggestion to citizens who voted for her party that it should be left in perpetuity on the sidelines “because Micheál doesn’t like us”.

Ms McDonald accused Mr Martin of a “diatribe and vitriol” that served him very badly, and referred to what she described as his “very narrow and bitter mind”.

“Fianna Fáil and Fine Gael have run the show for almost a century and by Christ they’re not minded to let it go. And that really is what this is all about,” she said.

People had told her very clearly that they were voting for her party to be in government. It was not a protest vote but for a different government, she said.