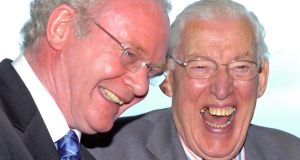 McGuinness and Paisley: “Our relationship confounded many. Our political differences continued but we were able to work effectively together.” Photograph: Alan Lewis

It was with deep sadness and regret that I learned of the death of Dr Ian Paisley yesterday.

He and I were political opponents for much of our lives, with very different views on many, many issues, but in the context of the Irish peace process, we were able to work together to deliver power sharing and partnership government in the North and the critically important North/South arrangements that came with this.

What united us after decades of division was the common view that our people were better able to govern themselves than any British government.

In the coming days historians and commentators will access the political legacy of Ian Paisley over decades but we must remember that his family are grieving for their loss.

I want to pay tribute to the work that Dr Paisley did in the latter stages of his political life in building new relationships with nationalism and republicanism and, critically, in bringing political unionism into a new era of political partnership and co-operation.

That came about because Ian realised that the best way forward was through inclusive government.

Ian Paisley was probably the only person who could deliver unionism into this transformed situation. He knew that; he was committed personally to this new approach and he threw himself heart and soul into it. He never doubted that this was the correct and proper way to go.

Despite our differences, I found him to be a charismatic and powerful personality. He always treated me and those who worked with me with respect and courtesy.

One of the most amusing episodes for me as an Irish republican was when, in our first formal meeting as First and Deputy First Minister, he suggested sending a letter to the British secretary of state asking him to immediately vacate Stormont Castle.

We did so in our first joint letter as First and Deputy First Minister. The British secretary of state and his staff were taken aback but did so.

When we moved into our offices the following week we discovered that they had taken everything with them, including the lightbulbs.

Our relationship confounded many. Of course, our political differences continued; his allegiance was to Britain and mine to Ireland. But we were able to work effectively together in the interests of all our people.

Joint visit to US

I have very fond memories of our first trip to the United States to lobby for investment for our people. Our joint visit sent a very strong message to the international community, and to Irish America in particular, that things had changed for the better in the North of Ireland.

The purpose of that visit was to lobby for foreign and direct investment and the events of the last few years have shown that to be hugely successful.

That initial visit attracted enormous attention and is the foundation stone of the many successful economic developments that we have achieved since.

We remained in close contact over recent years after he left office. Several months ago I visited Ian and Eileen at their home and had coffee with them. I stayed and talked with Ian and Eileen for several hours.

It was a great conversation but over the course of our talk it became obvious that he was weakening.

Hearing of his death came as a very sad blow.

I am very proud that he and I were part of something hugely important in terms of Irish history.

For many years Ian Paisley was seen as part of an intractable and unending problem in the North of Ireland. But in the end he made a powerful and determined contribution to resolving that problem and pointing to a new way forward based on dialogue, respect, partnership and reconciliation.

Ian Paisley’s legacy will, in my view, be judged by history as positive and forward-looking.