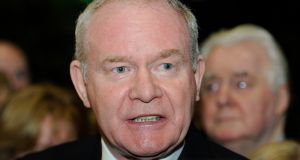 Speaking in Cork where Sinn Féin’s Cllr Donnchadh O’Laoghaire is well positioned to take a seat for the party in Cork South Central, Mr McGuinness said that if Fine Gael and Fianna Fáil were to form the next government, then Sinn Féin would lead a left-leaning opposition.

“On the way down I was listening to the radio in the car and it was quite clear to me there was certainly in some of the contributions that have been made from politicians on both sides, Fine Gael and Fianna Fail, they appear to be warming to some sort of arrangement between themselves.

“Now whether that will be a formal coalition or whether Fianna Fáil supports a minority Fine Gael government remains to be seen, but I think that’s the most likely prospect. But if that’s the case, then Sinn Féin will be the lead opposition party,” he said.

But while a stint in opposition would provide Sinn Féin with an opportunity to grow and form alliances with other left leaning parties and individuals, it would mean the Irish people would face another period of austerity which would have a huge impact on working people, he said.

“At this stage, I believe there will be some form of arrangement between Fianna Fáil and Fine Gael. That’s my sense of what is in prospect. You would basically have two right wing parties in government and a continuation of the austerity agenda.”

Mr McGuinness said that Labour had been “decimated and destroyed” for going into coalition with Fine Gael and allowing the larger party implement its austerity agenda and there was a lesson in that for Sinn Féin.

“We will only go into Government if we are the largest party. That is clearly not going to happen so I believe Sinn Féin will become the leaders of the opposition,” said Mr McGuinness, adding that Fine Gael had displayed “a considerable amount of arrogance” in its election campaign.