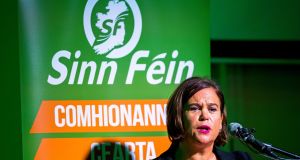 Sinn Féin president Mary Lou McDonald says the English man who left £1.5 million (€1.7m) to the party in his will is a “rebel with a cause”.

William Edward Hampton, who died last year in Wales aged 82, was living in a mobile home when he made his last will and testament, in which he left the donation to Sinn Féin.

It is understood to be the largest known donation to a political party in Northern Ireland.

“I did not know Billy Hampton but judging from people who did know him he considered this to be a very robust statement against the political establishment,” she said.

He obviously saw in Sinn Féin an organisation that is full square for Irish unity, for progress and for peace and prosperity in Ireland but also a party that stands full square against the political establishment,” she said.

“I can only say Billy was a rebel, a rebel with a cause. He clearly shared our goals.”

Ms McDonald said it would be “inappropriate to comment” on Mr Hampton’s mental health issues.

Ms McDonald was speaking at the party’s annual away day in Dundalk Co Louth.

He named two senior republicans – Joe Cahill and Dessie Mackin – as his trustees and executors in a will sworn in June 1997 when he was living in a mobile home in Ireland, reported to be in Co Cavan.

Belfast native Mr Cahill, who died in 2004, was former chief-of-staff of the Provisional IRA and later a senior figure in Sinn Féin. He held the title of honorary life vice-president of Sinn Féin until his death at the age of 84.

Mr Mackin, also a native of Belfast, was joint Sinn Féin national treasurer with Mr Cahill for 10 years up to about 2001, when the party established the position of finance director, a position he then took up.

According to his will – a copy of which was obtained by The Irish Times – Mr Hampton said that if Sinn Féin ceased to exist, split or took on a different name by the time he died, he wanted the bulk of his fortune be left “to the political party to which Mr Gerry Adams MP then belongs”.

Should Mr Adams pre-decease him or not be a member of a political party at the time of his death, Mr Hampton directed that his money should go to the republican or nationalist party “in the six counties other than the SDLP which has the largest number of elected local councillors”.

The London-born mechanic and driver listed former addresses in Durrus, west Cork and Cambridgeshire in the UK in the will. He used a firm of solicitors in Wales as his postal address.

He left small sums of cash to four people, including £1,000 each to Labour MP Dennis Skinner and to an investigative journalist with Private Eye magazine, Paul Halloran.

“All the rest, residue and remainder of my estate of whatsoever nature and wheresoever situate, to include my assets in Ireland, England, Singapore and New Zealand and other assets I may have anywhere else in the world I give devise and bequeath to my Executors and Trustees, Joe Cahill and Dessie Mackin in trust for the political party in the Republic of Ireland known at this time as Sinn Féin,” according to the will which was witnessed by a Co Cavan solicitor.

“This money is to be applied by my Executors and Trustees to cover election expenses, to fund Sinn Féin offices and advice centres and to aid Republican Prisoners and their families in both Ireland and Britain.

“For the purposes of clarification the organisation which I intend to benefit is commonly known as Provisional Sinn Féin to distinguish it from Republican Sinn Féin. In the event that the organisation which is now known as Sinn Féin should cease to be in existence or should have split or taken on a different name at the date of death then I direct that my Executors and Trustees are to apply my monies to the political party to which Mr Gerry Adams, MP then belongs,” the will adds. – Additional reporting: PA