As Lucinda Creighton prepares to launch party, Hobbs will be crucial to kickstarting campaign 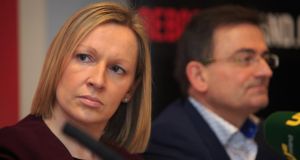 Lucinda Creighton and Eddie Hobbs: the new party’s watchwords are reform and change, but it needs to attract ideas and personalities. Photograph: Gareth Chaney/Collins

Those who believe the new political party that will be formed in early March will be a Lucinda Creighton vehicle have not taken account of the Hobbsian effect.

No, not the guy from the early 17th century who described life as solitary, poor, nasty, brutish, and short.

Rather the fast-talking guy from Cork who declared once upon a time – almost as dramatically – that Ireland was “eating its young”.

Wherever Creighton goes and appears as the new nameless party takes shape over the next month, Eddie Hobbs will also be there. And his presence is important because, without him, it is arguable no amount of rebooting will stoke the nascent party into life.

Since leaving Fine Gael, Creighton has been arguing a variation of the thesis put forward by English philosopher Thomas Hobbes in Leviathan that without strong government society will fail. To that end, she has said her natural political environment is within the structures of a political party, rather than as an independent. And she said last night she’s confident the new party will have a strong slate of candidates

Step forward Hobbs, the personal finance adviser and personality. It is clear from the new party’s first day on the hustings in Cork yesterday that he isn’t there as a benefactor or sponsor but intends to play a leading role in the party.

Yesterday was a big test. The party’s Pair of Personalities visited Cork and met companies and groups that reflect some of its political priorities. The first step was Simon’s emergency homeless shelter, and there was also a visit to a childcare centre, both designed to show the party’s remit and political reach is wider than the pigeonholes of centre-right business orientation and moral conservatism that have been applied.

But in visits to two very impressive Cork SMEs in the afternoon, Denise’s Delicious Gluten Free Bakery and WiseTek Solutions Ltd, both gave strong inklings of priorities: support for entrepreneurship and business through tax policies and support policies; and political reform that will look at everything from appointing ministers from outside politics, single-seat constituencies, list systems and better use of Seanad Éireann.

It was a bit of dipping its toes in the water, a bit of an acid test. But at least its outlook is taking shape and it is more Hobbsian than we thought.