Earlier, Kevin ‘Boxer’ Moran elected to the Dáil, along with Robert Troy 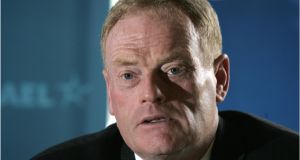 Fine Gael TD James Bannon said one third of Longford’s votes went to candidates from Co Westmeath and that those people ’will now have to examine their conscience and any respect for their county and their county going forward’. Photograph: Dara Mac Dónaill.

As few as three votes separate Fine Gael’s James Bannon and Labour’s Willie Penrose who are battling against elimination in Longford-Westmeath, according to party sources observing a recount in the constituency.

Returning Officer Imelda Brannigan agreed to a full recount in Longford-Westmeath, which was called Mr Bannon, and counting resumed at 10.30am on Tuesday.

The distribution of Kevin ‘Boxer’ Moran’s surplus is believed to put Mr Penrose two to three votes ahead of Mr Bannon.

She called the recount on Sunday as she trailed Fine Gael’s James Bannon by 38 votes on the 12th count.

Following a full recount the gap between the two candidates widened to 40 votes.

Returning officer Ms Brannigan said “no significant error” was found during the recount that would alter the results and she eliminated the first-time Dáil candidate.

After conceding defeat, Labour’s Willie Penrose is once again in the race for the final seat.

The Westmeath man failed to secure a recount when just 19 votes separated him from James Bannon on the thirteenth count.

“I certainly told you earlier on I was counted out and I had accepted that. I was pretty much resigned,” said Mr Penrose.

“Now I am in the hunt, I am not that confident of winning the thing but I am there to be knocked out again,” he said.

“It is amazing the vagaries of PR, what happens, it just shows you,” said Mr Penrose, who admitted “the very fact that you are an outgoing TD is an advantage”.

He referred to “the great euphemism I am going to give you a scratch,” and said “a lot of people want to honour their commitments when they say I will give you a scratch, and I think that is what is evident and has transpired in the transfers here, number 12s and number 14s become number ones. I think it is a testimony to the system we have.”

He said “I am not surprised there is a recount. My own view is that when it goes into single figures a recount is warranted at all times.”

Mr Bannon said “the biggest upset of this whole campaign would be the fact that 33 per cent of Longford people voted for Westmeath candidates”.

“I can’t explain it,” Mr Bannon said, “there’s no sense of pride in one’s county when that happens. You talk about putting on the county jersey and everything else and when you see that happening it is quite annoying.

“Longford needs a TD, I emphasised that during the course of the campaign because I pointed out that counties like Carlow and Leitrim lost their TD in the past and they were at serious disadvantage because they had nobody at Government level to advocate on their behalf.”

Mr Bannon said the loss of a TD “never happened in the history of the State, Longford always had two TDs, but I don’t know why so many people went along and voted for Westmeath candidates or what they were thinking of.

“People that I spoke to over the last number of days can’t believe that this has happened, the evidence is here at the tallies,” he said.

Mr Bannon said one third, or more than 6,000 of Longford’s 18,000 votes went to candidates from Co Westmeath and that those people “will now have to examine their conscience and any respect for their county and their county going forward”.

Co Westmeath-based Sinn Féin candidate Paul Hogan said he wanted to represent the both counties. “The fact that the larger parties distinguish between the two counties is a form of gerrymandering,” he claimed, adding, “they carve up constituencies to gain the maximum number of seats they can”.