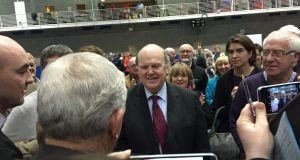 Minister for Finance Michael Noonan (Fine Gael) speaks to supporters after he and Minister for Education Jan O’Sullivan (Labour) took the final two seats in Limerick city, after both were elected with the help of Sinn Féin transfers. Photograph: Kathryn Hayes

Outgoing ministers Michael Noonan and Jan O’Sullivan have taken the final two seats in Limerick city, after both were elected with the help of Sinn Féin transfers.

They were both elected after failing to reach the quota and following transfers from Sinn Féin candidate Maurice Quinlivan who took the second seat in the four seat constituency.

Fianna Fáil Wilie O’Dea’s topped the poll in Limerick City and was elected with a surplus of more than 3,500 votes on the first count. Sinn Féin’s Maurice Quinlivan took the second seat.

Ms O’Sullivan made a late comeback for the last seat which at one point during the day she looked like losing to outgoing FG Deputy Kieran O’Donnell who failed to retain his seat.

Speaking after his election, Mr Noonan – whose first preference vote dropped from 13,291 in 2011 to 7,294 this time out – said the overall result for Fine Gael was a “reversal of what happened” five years ago.

“I think it was a reversal of what happened in 2011 party allegiances are reverting back to what was the norm and the Fianna Fáil vote came back to Fianna Fáil; we got a lot of it the last time.”

“This is my fourteenth time being re-elected at counts in Limerick: 11 general elections and three local council elections. Sometimes I got very big votes and other times I didn’t. This was a day when I got within 40 votes of the quota with over 9,000 votes.”

Mr O’Dea claimed his success in the general election was not down to any “new-found popularity” insisting his huge personal vote has allowed him to “fight another day”. He claimed that “culturally a lot of Irish people are Fianna Fáil”.

When questioned about the resurgence in his popularity given his sizeable first preference vote the traditional Limerick poll topper quipped: “Oh God, my popularity was never new-found. On the last occasion the tide was out for Fianna Fáil but my personal vote held me in there to fight another day. A lot of votes that were lost from Fianna Fáil are now coming back.

“Somebody said that culturally a lot of people in this country are Fianna Fáil and they needed a very good reason to vote against us and I suppose they had that the last time. People were very angry, they blamed Fianna Fáil for all their ills.”

Speaking at the count centre at University Arena, Mr O’Dea said it is “incumbent” on all newly elected TDs to put a stable government together but also warned against Sinn Féin leading the opposition.

Mr O’Dea said the country had gone through the “hassle, expense, and disruption of an election campaign” but accepted it is a possibility.

Some 47,195 votes were cast in the four seat Limerick city constituency, according to the final tally results.

Limerick city was a new constituency at the last election which lost the rural end of the old Limerick East and was centred on the city and its suburbs. However, in the most recent constituency review a swathe of the old rural east Limerick was added back to it as a four-seater in the slightly smaller Dáil.

With a rural population of 11,197 added to the city, the new constituency now stretches out past Cappamore as far as Bilboa on the Tipperary border. It has changed the complexion of the constituency to some degree but there aren’t enough rural voters to fundamentally alter its make-up.

As in all other constituencies, job creation is a big issue in Limerick but here the news is good. At least 850 new jobs have been announced by the multinational sector since the beginning of the year and the pace of new investment appears to be accelerating. While Dell cut its workforce by more than 1,000 during the recession, the inflow of new jobs has more than compensated.

The role of the local third-level education sector in providing the appropriate training for these industries has been crucial and the continued viability of Shannon Airport as an independent entity has also helped.

However, overcrowding in the accident and emergency wing of Limerick Regional Hospital is a potentially negative issue for the Government parties as is the housing problem. Limerick, like other major urban centres, is suffering from a shortage of affordable housing and people are being forced into expensive rental arrangements.

Crime in the city is not as big a problem as it was some years ago but rural crime has emerged as a worry for a significant number of voters. The death of John O’Donoghue, who suffered a heart attack after encountering a gang of intruders running out of his home near Doon, highlighted the problem. Other people in the area have had their hay sheds burned down in recent times and there are demands for more gardaí in the area.