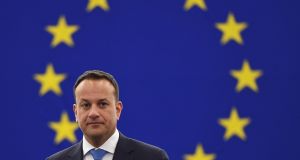 This first Irish Times/Ipsos MRBI poll of 2018 shows Fine Gael maintaining a substantial lead over Fianna Fáil despite retreating slightly from the high watermark they set in December.

For Fine Gael it has been two steps forward and one step back. The five-point gain the party enjoyed on the back of a strong Brexit performance in December is now a three-point gain one month later. Still, on 34 per cent, Fine Gael have a significant nine-point lead on Fianna Fáil.

Fianna Fáil (on 25 per cent) and Labour (on 4 per cent) are unchanged, as too are Sinn Féin who register 19 per cent support for the third poll in a row. Independents/Others are up two points to 18 per cent, reversing a downward trend that began in late 2016.

Fieldwork for today’s poll was conducted on Monday and Tuesday of this week among a nationally representative sample of 1,200 eligible voters. Interviews were conducted in home across 120 sampling points covering all 40 constituencies.

The timing of this poll is especially pertinent as it provides an up-to-date measure of party support following Micheál Martin’s announcement to Dáil Éireann of his intention to vote to repeal the Eighth Amendment. Leo Varadkar, on the other hand, has yet to declare his intentions.

Holding back, it appears, has done Varadkar no harm. His satisfaction rating – at 60 per cent – is the highest for any party leader in this post-crisis era. The last politician to scale these heights was Bertie Ahern in 2007. Among Fine Gael supporters, his satisfaction rating is an impressive 91 per cent.

Leader popularity is just one factor in the party support equation. The economy is another. With the abortion debate so topical in the media, we can easily forget that today’s poll findings come against a backdrop of encouraging economic data which are helping to underpin support for Fine Gael.

Satisfaction with the Government’s performance and with the Taoiseach’s performance are highest among the professional and upper managerial classes (ABs) – 57 per cent and 74 per cent respectively. Support for Fine Gael also peaks among ABs, at 53 per cent. The consensus, it seems, among Ireland’s highest earners is that Fine Gael are doing a good job of running the country.

Fianna Fáil, who have supported the Government through a confidence-and-supply arrangement, have not obviously profited from the improving economic situation. In this January poll the party attracts 25 per cent support, more or less on a par with their 2016 general election result. Fianna Fáil trail Fine Gael among the under 35s (by 13 points), in Dublin (by 17 points) and within the AB socioeconomic group (by 29 points).

Satisfaction with Micheál Martin is lower, albeit marginally, down one point to 42 per cent. Among Fianna Fáil supporters, his approval rating is 73 per cent, compared to 77 per cent in our December poll.

What stands out for Labour is the absence of any demographic skews in their voter profile, with appeal evenly distributed across the various age and socioeconomic groups

Sinn Féin have also taken up where they left off in 2017, holding their support at 19 per cent. Age and social class tend to shape party preference and this is especially true for Sinn Féin. The party has a loyal following among the under 35s (28 per cent) and the lowest socioeconomic group (32 per cent). In contrast, support among over 65s and highest income voters (ABs) is much lower – 12 per cent and 6 per cent respectively.

Labour continue to languish in the polls. Party support is stuck on 4 per cent and satisfaction with Labour leader Brendan Howlin has slipped marginally (down one point to 18 per cent).

What stands out for Labour is the absence of any demographic skews in their voter profile, with appeal evenly distributed across the various age and socioeconomic groups. Geographically, Dublin is where Labour is strongest, registering 6 per cent support. Outside Dublin, support falls to 3 per cent.

The Independents/Others grouping has gained two points (to 18 per cent), signalling an end to the drift away from Independents and small parties that began following the 2016 general election when combined they attracted a record 30 per cent of the vote.

Overall, there have been no significant changes in party support since December. Fine Gael remain in the driving seat. But it is only January and 2018 promises to be an eventful year.