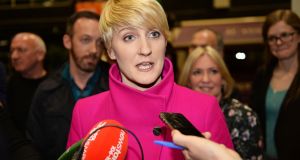 Minister for Health Leo Varadkar has given his support to former Fianna Fáil, now Independent, Seantor Averil Power in the Seanad elections.

Mr Varadkar said: “I will be giving Averil Power my number one vote in the Seanad election and urge other Trinity graduates to do the same.

“I have known her since college, where she was an excellent president of the Students’ Union.

“ I really respected her leadership in the marriage equality campaign. She has also been a constructive and effective member of the Seanad and I hope she is re-elected.”

A number of unsuccessful candidates in the last general election have been nominated for the Seanad elections.

Gabrielle McFadden and Kieran O’Donnelll of Fine Gael have been nominated for the Cultural and Educational panel.

Fine Gael’s Noel Coonan, Anthony Lawlor and Sinn Féin’s Trevor O’Clochartaigh are among those nominated for the Agricultural panel.