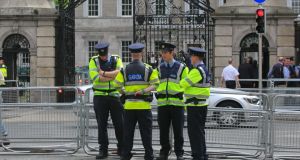 Leinster House is under potential threat from “fixated loners”, gardaí have warned TDs.

Amid heightened security concerns consideration is being given to installing additional internal alarms and upgrading external CCTV to counteract the risk of someone concealing themselves on the premises during the night-time lock-up.

Some ushers are also expected to be sent to Northern Ireland for training.

Garda Commissioner Nóirín O’Sullivan met the Dáil’s Committee on Procedure and Privileges recently following concerns about security after an anti-water charges protest that left a garda in hospital.

The quick reaction of ushers and gardaí, combined with the effective implementation of a lock-down system, prevented him getting beyond the revolving door on the Kildare Street side of the building.

While gardaí continued to assess the overall level of threat as normal after the incident, a document discussed by the committee last month quotes from a Garda report which states: “There is a possible threat posed by a loner/fixated persons who have an obsessive preoccupation with a person, place or institution.”

The report recommended electronic scanning equipment be used on all visitors to Leinster House, which would represent a significant change to procedure. This has not yet happened.

The Northern Ireland Assembly operates a visitor-searching policy and is prepared to give training assistance to Oireachtas staff.

An “anti-bandit” screen is also to be installed at the Leinster House reception desk.

A Leinster House spokesman said he was not in a position to comment on security matters.