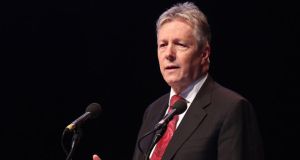 First Minister Peter Robinson and Fianna Fáil leader Micheál Martin have taken opposing positions over unionist claims that in 1969-1970 the government, led by taoiseach Jack Lynch, played a key role in the creation of the Provisional IRA.

Mr Martin has said it was violent unionist repression of the civil rights movement in the late 1960s that created the “breeding ground” for the violence of the Troubles.

DUP leader Mr Robinson, however, said of the period around the 1970 Arms Crisis: “It is a period of time which shows very clearly that the Irish State was funding the guns going to the Provisional IRA, was preparing itself to invade Northern Ireland. And now of course they sit back and try and draw a blind over this area of history.”

The conflicting comments from Mr Martin and Mr Robinson are contained in a new series, entitled The Legacy, beginning today on the Detail investigative website.

Detail editor Steven McCaffery deal with issues such as the Dublin-Monaghan bombings, IRA targeting of Border Protestants, the 1970 Arms Crisis and allegations that the Jack Lynch-led government played a significant role in the formation of the Provisional IRA.

The Legacy reports were carried out with the support of the North’s Community Relations Council. They also address issues such as draft government plans in 1969 for limited military intervention in the North to protect nationalists from loyalist sectarian attacks – plans subsequently aborted – and the 1970 Arms Crisis over plans to import arms for beleaguered nationalists in the North.

It also deals with the allegation by the late head of Army intelligence, Col Michael Hefferon, that the plan to import arms was carried out with the knowledge and support of the then minister for defence James Gibbons – a claim denied by the government in 1970.

Several unionists have claimed the Arms Crisis proved that the government was complicit in the creation of the Provisional IRA with Mr Robinson, citing the Col Hefferon case, making the same allegation.

“There have been a number of journalistic inquiries into the Arms Trial issues which showed a very clear responsibility on the part of the State,” he said. “But it has been buried. People don’t want to talk about it. It’s not a case of being embarrassed, they seem to be offended if the issue is raised, but at the same time are quite happy to point the finger at the British state.”

government files on the era to be opened to scrutiny, said that “very clearly . . . the Irish State was funding the guns going to the Provisional IRA”.

Mr Martin rejected Mr Robinson’s allegation. “The crisis in Northern Ireland had its origins in the failure of the Stormont government of that time to properly address the legitimate concerns of the civil rights movement, preferring instead violent repression which created the breeding ground for the . . . violence which blighted the following 30 years.”

He said that if an apology were required it must come from those who were morally culpable. “It must be offered by those who hold moral responsibility for the actions involved. The death of almost 1,800 men, women and children at the hands of the IRA was a hideous crime . . . But it is not a crime for which the Irish Government has culpability,” said the Fianna Fáil leader.

The Detail also provides Westminster statistics on extradition from South to North. “In the period between 1973 and 1997, at least 110 requests were made to the Republic of Ireland from the UK. At least 42 people were arrested and eight were extradited back to the UK.”