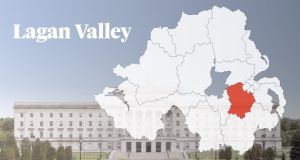 Lagan Valley’s turnout of 53.2 per cent was statistically higher than that recorded for Assembly elections five years ago, and it was one of the few constituencies to achieve this feat across Northern Ireland.

Former first minister David Trimble watched on as the UUP claimed multiple seats in the Lagan Valley constituency for the first time since 2003 on Friday.

The DUP’s stranglehold on the area was relaxed somewhat as it saw its seat count reduced from four to three, and a former party member played an instrumental part in its partial demise, as the UUP’s Jenny Palmer claimed one of two seats for the Ulster unionists.

Ms Palmer, who quit the DUP in controversial circumstances last year amid claims by her that she was bullied, was joined in victory by UUP running mate and fellow new MLA Robbie Butler.

“If you look at the first preference votes, there wasn’t very much in it, and that’s because the people of Lagan Valley determined that they wanted change. It’s a massive difference for Lagan Valley in terms of two Ulster unionists returned,” she told The Irish Times after polling 3,871 first preferences.

She said the dispute with her former party is now “water under the bridge” and that she is looking forward to working with all sides in the new Assembly.

Despite losing an MLA, former Stormont minister for health Edwin Poots said the result did not constitute a total disaster for the DUP after he himself gained re-election alongside Brenda Hale and poll-topper Paul Givan.

Mr Poots paid tribute to his unsuccessful colleague Jonathan Craig, and reflected on what was a reasonably strong election for his party overall.

“My enjoyment at being elected is heavily tinged with regret that Jonathan (Craig) has missed out by such a small vote,” he said. “I’m just so delighted with the vote of confidence that has been placed in the DUP right across the province, over 200,000 votes, and we are overwhelmingly the largest party in Northern Ireland, overwhelmingly the largest unionist party and the people have spoken very, very clearly on that front.”

The bounce in support for UUP candidates was largely attributed to a drop in first preference votes for returning Alliance Party MLA Trevor Lunn.

His total of 3,707 was down substantially on his 2011 showing, but he eventually moved up the table on transfers as expected and was deemed elected on the seventh count.

The SDLP was said to be happy with an improvement of over 600 votes for Pat Catney compared with 2011, but his haul of 2,899 was not sufficient to mount a serious challenge for a seat.

FG and FF back transition payment for persons retiring before to right to State pension 00:10
Lobby to press politicians over referendum on right to home 00:05
Irish Times poll: Large majority want change of government 23:33
Animal welfare group raises concern over live exports 22:25
Two men questioned about attack where man was set on fire 22:01
SUBSCRIBER ONLY