Deputy leader Joan Burton will make statement on her leadership plans at 2.30pm 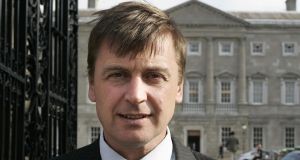 Labour TD Dominic Hannigan said there should be a clearout of the entire party front bench. Photographer: Dara Mac Dónaill

A Labour deputy has called for the entire Labour front bench to step down and a Minister in the party has said the deputy leader needs to come from the “newer generation” of TDs.

The comments come ahead of a statement by party deputy leader Joan Burton at 2.30pm in which she is expected to confirm that her plans to contest the leadership.

Earlier Meath East TD Dominic Hannigan said today “we need to see a total removal of them,” referring to the front bench, adding that he is considering going for the party leadership.

Asked if he was calling for a complete clear-out, the first-time TD said he thought that was necessary.

“What we don’t need is experience of 25 years in a bunker in Leinster House.”

“I don’t think that the answer is going to come from people who have been within Leinster House for the last quarter of a century,” he said.

“We need to look to the next generation. To people like Alex White, to people like (Louth TD) Gerald Nash,” Mr Hannigan said adding that he had been approached by many people suggesting he should run.

Labour Minister of State for Housing Jan O’Sullivan said today the deputy leader of the party should come from the “newer generation” of TDs.

Ms O’Sullivan said she was not running for either the leader or deputy position.

“I’m not running for leader and I do believe the deputy leader in my personal opinion should probably come from the newer generation of Labour Party public representatives, and we have some very fine people in that group,” she said.

“But certainly I do think that we need to see the younger generation, or rather the newer generation rather than younger, involved as well,” she added.

“I don’t think it matters what age you are. I think it is around having a mix of experience and new ideas.”

Mr Hannigan also warned that the Labour Party could disappear as a political force if radical changes were not made.

“There’s a real danger that after the next election, if we don’t do something serious and significant, that the party will be gone, gone the way of Kodak, gone the way of the PDs,” he said.

He said the promises made before the 2011 general election were “foolhardy”. The electorate had “lent” votes to Labour and had now “lent” them to Sinn Féin.

Mr Hannigan said what he described as the “removal” of former party leader Eamon Gilmore was “sad but necessary”.

Mr Hannigan was speaking on RTÉ’s Morning Ireland ahead of the statement today by Ms Burton.

Eamon Gilmore stepped down on Monday following the party’s disastrous performance in the local and European Parliament elections on Friday.

Ms O’Sullivan lost out to Ms Burton for the position of deputy last time.

She has not yet decided who she was backing and said she would wait to see who was running before declaring.

Ms O’Sullivan said it was a tense time for the party. “We’ve obviously been through a very difficult time and lost a lot of very good colleagues.”

Meanwhile, Fine Gael Minister for Transport Leo Varadkar said the Labour Party’s issue was “none of his business”.

He did not anticipate tensions at Cabinet. “We are in a new scenario. It’s certainly my first experience of a change of leadership during a Government term.”

Social Democrats to ‘radically scale up’ number of new homes 17:59
Over 65s are expected to ‘crawl into corner and die’, says election hopeful Valerie Cox 17:56
Seven arrested in PSNI crackdown on money laundering crime gang 17:40
Man shot at in taxi claims bail conditions made him ‘sitting duck’ 17:28
Gay man awarded €27,000 for harassment over his sexual orientation 17:03
SUBSCRIBER ONLY