‘Labour’s back,’ Penrose says after winning the last seat 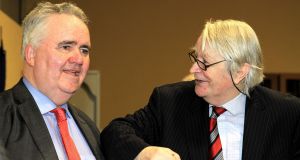 Willie Penrose has said that nobody should write off the Labour party after he retained his seat in Longford-Westmeath and ensured the party’s speaking rights in the Dáil.

His victory gives Labour seven seats, sufficient for group status, and puts the party ahead of both the Independent Alliance and the Anti-Austerity Campaign- People Before Profit grouping, both of which have six TDs.

He was elected 2,880 votes behind Fine Gael councillor Peter Burke on the 15th count with Sinn Féin’s Paul Hogan losing out on the final seat, coming in 681 votes behind Mr Penrose.

Fianna Fáil’s Robert Troy topped the poll and was elected on the first count and Independent Alliance candidate Kevin “Boxer” Moran was the second TD elected in the constituency after the marathon six day count that continued right through Wednesday night, and ended shortly after 8.30am on Thursday.

He called a recount when it emerged that he was about two votes behind his Labour party colleague.

The recount widened the gap to six votes.

Mr Bannon said he was considering whether to legally challenge the Longford-Westmeath result after he was eliminated from the competition on the 14th count, six votes behind Labour’s Penrose.

Mr Bannon told reporters he would consider whether to take the “legal option” and would decide within the 14 days legally allowed.

“The margin of my defeat is very narrow. I will assess the results in this context and only after I have taken careful advice I will make a decision whether or not to pursue the legal option. I will take advice and make a decision in a very timely manner.”

Mr Penrose said the victory meant more to the party than it probably did to him personally because “I had resigned myself, conditioned myself to the fact that I was returning to private life”.

He thought he had lost the seat but “on Sunday evening there was the stirrings of life and by Monday evening I suppose I was beginning to grow a little again”.

Mr Penrose described the victory as very important to the party because it was the oldest in the State, founded in 1912.

He said they had “an ethos and a philosophy of our own that’s different than the social democratic mode”.

He said “for those people who write our obituary and prematurely dismiss us, that we’re gone. Let them take this as a warning — we’re back and we will set about making sure that we’ll reorganise and rebirth this great party.”

Longford-based Mr Bannon said it was “shocking” that Longford was left without a TD for the first time since the foundation of the State.

But in their acceptance speeches to a much diminished hall each of the four TDs said they would do their best for Longford. Mr Troy said he had campaigned as a candidate for the entire constituency.

Mr Moran said he considered himself a Westmeath-Longford man.

Mr Burke said he was “thrilled” for himself and his family and he would “do my very best” for the constituency.

In his acceptance speech Mr Penrose said he had won the seat “the old-fashioned way. I knocked on doors” and with not much advertising. He said he did not do Twitter or Facebook.

“You can win elections in the old traditional way and I’m very proud of that.”