Labour needs to reach out to a broader constituency

Wouldn’t it be refreshing if our politicians broke from the shackles of Civil War politics and chose a side? 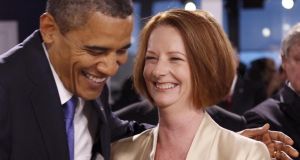 The result of the Meath East byelection has confirmed what polls and five minutes of listening to Joe Duffy have pointed to for many months. Many people feel let down by the Labour Party, believing it has reneged on its election promises.

The biggest complaint about Labour is that it has sold out; that it is not “left enough” and that it is simply propping up a right-wing party in government to enable it to carry out the same policies as those of Fianna Fáil. But it would be advisable for Labour to be cautious before deciding to take a sudden turn “left”, particularly as it would appear that the main beneficiary of the collapse of Labour’s vote was a party of the centre right – Fianna Fáil.

So why do Irish voters reward a party of the broad centre right to punish another political party for not being left enough?

I moved to Australia almost two years ago. After more than 15 years working in public affairs and politics in Ireland, I now work with one of Australia’s leading campaigning trade unions. This has given me a close-up view of politics here in a short space of time, and in particular, the internal workings of the Australian Labor Party.

One of the complaints we often hear from the general public and the media is that politics in Ireland is a mere “Punch and Judy” show. We are led to believe that it is different in other countries, and that somehow there is a much more collaborative style of politics, that attracts people with loftier intentions to the profession.

There is also an illusion that in other countries, national politicians are not as obsessed with local issues, and are more focused on solving the big issues of the day. In Australia neither of these arguments holds true. There is nothing quite as combative as Question Time in the parliament. The recent speech by Australian prime minister Julia Gillard about Conservative leader Tony Abbott’s misogyny is a case in point. The personal nature and viciousness of parliament was particularly pointed that day, but it was not dissimilar from the weekly exchanges across the chamber from two politicians with very differing visions of Australia.

Local issues
As for Australian politicians not focusing on local issues. Week after week backbench opposition MPs rise in the House of Representatives to speak about “Ross and Barb” . . . a couple from (insert name of constituency) who can’t pay their household bills due to the (insert name of unpopular government levy).

Like many Labour parties worldwide the ALP was born out of the trade union movement, and today it values that close relationship, while reaching out to business and fighting with Conservatives for the support of the aspirant working class. Australian Labor’s membership is made up of social democrats, socialists, communists, social progressives and almost everything else in between.

It keeps all of these together by organising into “factions”. The “right” faction includes members who, while sharing the vision of an Australia that promotes equality of opportunity, believe it is best achieved by reigning in the excesses of capitalism, rather than overthrowing it. It is the faction that includes most members of Irish descent, including the highly regarded backbench MP Deborah O’Neill, (a former Sydney Rose), who holds one of the country’s most marginal seats.

The socialist or “left” faction attracts many of the radicals within the movement, some of whom might be termed militant, and also attracts most of the party’s social progressives.

One issue which demonstrates how the ALP reaches out to a wider constituency is the issue of marriage equality. A recent vote in parliament to legalise gay marriage was defeated. The ALP did not impose a whip on its MPs, deeming it a “conscience” vote. The majority of Labor MPs voted in favour, with a significant number voting against. However, the right coalition enforced a whip with all of its 70 or so MPs voting against, dooming the Bill to failure. This allowed the ALP to show that it is the party most likely to make progress on the issue in the long term, while allowing its MPs who represent the vital battlegrounds in places such as Western Sydney to represent the views of their socially conservative electorates.

Differing visions
Wouldn’t it be refreshing if our politicians broke away from the shackles of Civil War politics and “picked a side”. Two broad churches of the left and right, debating issues taking into account their genuinely held differing visions of Ireland. Two main parties, one of which would include most Labour members, social democrat-minded Fine Gael TDs and members of Fianna Fáil who may be socially conservative but hold a centre-left view of economics.

On the other side we would have most of the Fine Gael party, a large rump of ex-Fianna Fáilers and those who were active in the Progressive Democrats. The return of Michael McDowell, anyone?

Perhaps as Ireland continues to re-imagine itself as it rebuilds after the economic crash, we can give some time to truly look at our politics and grasp an opportunity to align along the same lines as applies in most modern democracies. But to have any chance of achieving this, Irish Labour needs to reach out to a broader constituency, rather than retreating to its base.

And let us not fool ourselves. If Irish politics did make this change, there would still be lots of “Punch and Judy” politics, and pandering to local concerns. And so there should be. It’s called democracy. And for the most part – it works.


Dermot Ryan is the chief of staff of the Transport Workers’ Union of Australia and a member of both the Australian Labor Party and the Irish Labour Party. Previously, he was employed in political, NGO and public relations roles in Ireland