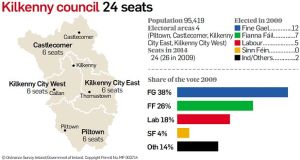 The county’s five electoral divisions have become four; the borough council is being abolished; and Kilkenny County Council hopefuls are fighting for 24 rather than 26 seats – all as a result of Boundary Committee recommendations.

The Ballyragget electoral area is no more, instead forming part of the new Castlecomer district, which takes in Gowran, Paulstown, Urlingford and Freshford.

The former Kilkenny City area has been split in two with councillors in the new districts serving urban and rural communities. Kilkenny City East stretches from Dunmore to The Rower and takes in the old Thomastown district.

Callan is now part of Kilkenny City West, which extends from St Canice’s to Coolaghmore. Candidates in the southern Piltown electoral district have been least affected by the shake-up.

Council hopefuls in the city districts are unsure if the loss of the borough council will see people vote for local or party representation.

Word from the canvass is that many voters are unhappy. The prospect of water charges is raising anger as is the loss of medical cards and the fact that property tax revenues were not spent locally on improving roads, footpaths and lighting.

Minister for the Environment Phil Hogan, a local TD, has overseen the property tax and establishment of a water utility. Fine Gael will do very well to repeat its performance here in 2009, when it won 38.2 per cent of first preference votes and took 12 seats. The party is fielding 16 candidates across the four six-seat electoral areas and expects to return two in each. A string of retirements could complicate matters, and Kilkenny City East will likely provide the biggest challenge given Fine Gael has no sitting councillor among its candidates – Michael Doyle, Jimmy Leahy and Patrick O’Neill, son of the namesake senator.

Labour could also find the going tough in this district where boundary changes leave it defending three seats. Michael O’Brien and Tommy Prendergast are vying in the former Thomastown district, with Marie Fitzpatrick seen as the better-positioned of the trio in the city.

Labour t would do well to return two candidates in the east. The party is running a single candidate in the other three districts with Cllr Maurice Shortall (Castlecomer) particularly well-regarded.

After securing seven seats (26.3 per cent first preference votes) in 2009, Fianna Fáil is running 17 candidates, and is targeting at least eight seats. Cllr Andrew McGuinness, son of Public Accounts Committee chairman John, is a potential poll-topper in Kilkenny City East. His Thomastown-based colleague Seán Treacy has a good chance of holding a seat and borough councillor Joe Reidy is also in the mix.

A particular focus is being put on the Piltown area, where Cllr Eamon Aylward, nephew of ex-TD Bobby and outgoing MEP Liam, is part of a five candidate strategy involving Cllr Cora Long and former hurler Brendan Fennelly in which transfers will be crucial.

Fine Gael is also running five candidates in Piltown, with Fidelis Doherty and Pat Dunphy hoping to retain their seats. Martin Brett, David Fitzgerald and William Ireland all have a fighting chance of being re-elected in Kilkenny City West. Mary Hilda Cavanagh is seen as a safe bet in the Castlecomer district. She runs alongside Cllr John Brennan, Thomas Byrne and Joan Fitzpatrick.

Sinn Féin will be hoping to increase the 3.5 per cent of first preference votes it won last time out rise. Kathleen Funchion in Kilkenny City West is regarded as the party’s best hope of winning a seat. Melissa O’Neill (Piltown), Caitríona Redmond (Castlecomer) and David Kennedy (Kilkenny City East) complete the party’s line-up.