Coalition intent on serving term but latest date for election not until April 9th, 2016 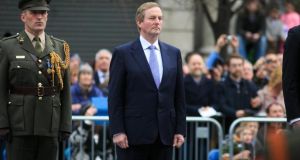 Taoiseach, Enda Kenny: Has repeatedly said the Government intends serving out its full term of office. The last possible date in the life of the 31st Dáil is March 8th, 2016. Photograph: Gareth Chaney/Collins

Taoiseach Enda Kenny has instructed his general election organisers that all Fine Gael candidates must be selected by October, a full six months before the last possible date for the election.

A meeting of Fine Gael’s election strategy committee, chaired by Minister for Justice Frances Fitzgerald, last week heard all selection conventions must be completed by the end of September or early October.

The Taoiseach has repeatedly said the Government intends serving out its full term of office and the last possible date the election can be held on is April 9th, 2016.

Senior party figures have suggested November or February are the most likely dates for the general election, once the budget has been completed.

Sources said Dublin MEP Brian Hayes, who has a senior role on the strategy committee, told the Fine Gael meeting last week the aim is to have 20 conventions completed, half of the 40 constituencies, by the time the Dáil rises for its summer recess.

One of those to be held in April is Dublin Bay South, where it is expected sitting TD Eoghan Murphy will be joined by a female candidate. Councillor Kate O’Connell is seen as the favourite of party headquarters, but local party activist Linda O’Shea-Farren is also expected to contest the April 16th convention.

One Fine Gael figure said the conventions will be mixed between those that are expected to be straightforward and others anticipated to be fractious, adding it was not the case that troublesome conventions would be left until last.

Fine Gael’s Ardfheis is scheduled for the weekend of January 22nd-23rd and is expected to take place in Dublin. Labour’s conference will be a one-day event the following weekend, and will be held in or near Dublin. The timing of both conferences has led to speculation about a late February election.

Easter Sunday falls on March 27th next year and schools will be closed for almost three weeks in the middle of March because the St Patrick’s Day and Easter breaks will run into each other.

“It probably makes sense to have the election in February, because the new Government would have to be in place for the St Patrick’s Day trips, especially to the US,” one Minister said last night.

“Especially in the centenary year, there’s likely to be [1916] events in America.”