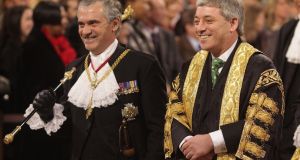 Could it happen in here? In Britain, Tory MP John Bercow (right) has been regularly re-elected as House of Commons speaker thanks to opposition support. Photograph: PA Wire

As the phoney election campaign continued along predictable lines this week, with Fianna Fáil and Fine Gael trading predictable blows, Enda Kenny did something entirely unexpected.

Kenny’s move to ensure that all future elections of cinn comhairligh will be by secret ballot caused surprise, arriving as it did in the dying days of the 31st Dáil.

Kenny also got Cabinet approval for another two political reforms. One will see the election of Oireachtas committee chairs on the basis of party strength rather than the current system of appointment by the government. Another is that the taoiseach of the day should appear before the working group of Oireachtas committee chairs on a regular basis.

Yet it is the secret ballot for the election of the ceann comhairle that garnered the most attention among politicians not yet consumed by their own re-election campaigns.

One Fianna Fáiler, only half-joking about possible post-election scenarios, said: “Well, we could nominate Michéal [Martin] for it when he is not leader anymore.”

All previous cinn comhairligh have been elected by the Dáil, a chamber often lampooned as a lapdog of cabinet, following nomination by the government of the day. The post has at times been a home for those who didn’t quite make senior ministerial ranks.

Yet the fact that Kenny may have stored up some future trouble for himself in the next Dáil – assuming he is re-elected taoiseach – was not lost on astute political observers.

It had been assumed that Kenny would again gift the position to a disappointed would-be cabinet minister. Names such as James Reilly, Michael Ring and now government chief whip Paul Kehoe had been mentioned. They may still throw their hats in the ring as the candidate Kenny “chooses to smile upon”, as one Minister put it.

The Dáil is to debate the new proposals next week, but some of the mechanics of how the election will be run have emerged. And they allow for mischief or, to be more considered, the opportunity for the Dáil to assert its independence.

Any deputy of the House will be able to stand for the position if they are proposed by seven deputies. While it is expected there will be conversations in political parties about who may stand, the election will not be run along party political lines.

Candidates will also be given the opportunity to address the Dáil on their proposals for the office. There will be a brief recess to allow TDs cast their ballots. Then the result will be announced and the new ceann comhairle will be in place before the election of a taoiseach.

Given the anticipated numbers of the next Dáil, it is likely the ceann comhairle will be a Fine Gael TD, but the role of the Opposition cannot be discounted when it comes to lower preference votes. A Fine Gael deputy not in Kenny’s camp could find favour.

As an indication of how it could play out, one Opposition TD said: “The proof of the pudding will be in the eating, whether it goes to a teacher’s pet or to someone who actually has the respect of the Dáil.”

In a similar vein, one name on the lips of some Government and Opposition TDs is a Fine Gael deputy who is certainly not in the Kenny camp: John Deasy, a longtime critic of the Taoiseach.

“I would be his campaign manager,” said one Fine Gael backbencher. “I’d nearly have to vote for him before our own,” said one Fianna Fáiler. “Deasy would allow us give Kenny a kick,” said another.

“He might not be liked by everyone, but he is respected, especially for his work on the Public Accounts Committee and for the undocumented Irish. Anyone who is serious about politics respects him.”

Deasy himself declined to comment when contacted last night. Yet the election of the Waterford TD to the position, if he were to enter the contest and win, would at once prove the bona fides of Kenny’s reform – and give the returning taoiseach a headache.