Kenny intends to hold the election in the Spring of 2016

Taoiseach says he sees no reason to change mind on date 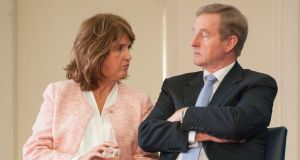 Taoiseach Enda Kenny has said the general election will be in the Spring of 2016 and insisted he sees no reason to change his mind.

Mr Kenny said his position has not changed despite a push for an early election in November.

Speaking on RTÉ television on Sunday, the Taoiseach said: “I have not changed my mind, my intention to hold the election in the Spring of 2016.”

“This is not about me as Taoiseach or me as a public representative. This is about the future and people have to have the choice of continued stability and investment.”

During the interview Mr Kenny repeated his intention to hold the election in Spring 2016 and to offer people the choice of continuing with Fine Gael and Labour. He said it will be a great contest and he was very much looking forward to it “when it comes”.

Fianna Fáil Leader Micheál Martin welcomed the clarity around the election but said the country “did not need to be treated to an unedifying spectacle this week of Labour Ministers and TDs appearing desperate to stay in government and Fine Gael representatives leaving the door open to a snap election after the Budget for their own political expediency.

“I asked the Taoiseach very straightforward questions on this and other matters related to the banking inquiry report on Tuesday and Wednesday and his decision to dodge and to fudge the issue shows his contempt for the Dáil and actually fuelled the uncertainty over the timing of the election.

“It’s difficult to take the Taoiseach seriously when he said he ‘never changed his mind’ on the timing of the election. He has been forced into a humiliating climb-down today.”

Mr Martin cancelled the delivery of the speech at a party function in Dublin on Saturday night as a mark of respect for the 10 people who lost their lives in the Carrickmines fire .

Speaking at the annual Uachtarán Fhianna Fáil President’s Dinner at the DoubleTree Hotel in Ballsbridge, Mr Martin made a short statement in which he extended his sympathies to the families and friends of those who died. Mr Martin’s planned speech, which had been circulated to the press earlier on Saturday, was due to be delivered to some 1,000 supporters.

In the speech, Mr Martin had planned to issue a rallying call, telling those gathered that Fianna Fáil is ready to battle the Coalition in the next election.

He had also planned to announce the appointment of former minister Pat Carey as the party’s director of elections.

The speech included criticisms of the Government’s record in office and Mr Martin had planned to issue a challenge to Taoiseach Enda Kenny to engage in a direct debate.

The Fianna Fáil leader had also planned to praise the achievements of his fellow-party members after they defied predictions to help the party become the largest party in local government.

This, he wrote “is why we can say to Fine Gael and Labour whenever you stop your bickering and call the election we are ready for you.”

Labour was “desperate” to “hold on” in government for as long as possible “in the hope that something will turn up.”

Turning to the Coalition’s record in office, Mr Martin accused both parties of sitting “quietly” in government and allowing “crisis after crisis to emerge.”

“For nearly five years these parties sat quietly and allowed crisis after crisis to emerge. In our health service, in rural crime, in housing, in homelessness, in mortgage debt, in exploitative job contracts and in many other areas they could not summon up a fraction of the energy they have given to the issue of when to call the election to their own advantage,” he wrote.

“Their biggest fairy tale is the claim that they ‘delivered’ the recovery.”

“They did nothing of the sort,” he insisted.

“What they did was delay the recovery and make it more unfair.”

The recovery, he wrote, “was delayed because of Fine Gael and Labour”.

Fianna Fáil, he claimed, implemented previous budgets “in a progressive and fair way”. Admitting the party made mistakes in the past, he insisted that “every independent study says we protected the weakest”.

“In contrast, Enda Kenny’s government took a deliberate decision to give the biggest benefit to those on the highest incomes.”

“They made it a two-tiered recovery. They chose to leave families and communities behind.”

The Government’s policy on health was in “disarray”, Mr Martin wrote.

Minister for Health, Leo Varadkar, has “been desperate” to talk about anything else other than health. Mr Varadkar had “pleaded with Enda Kenny to call an election before the emergency department chaos gets even worse,” the Fianna Fáil leader claimed.

Mr Martin was also due to announce that former minister Pat Carey, who was recently appointed chairman of the Irish Red Cross, will be Fianna Fáil’s director of elections in the next election.

“With him leading the team I know we will fight a campaign which draws on the strength of all of our members and is focused on our vision of an Ireland for all”, Mr Martin wrote.