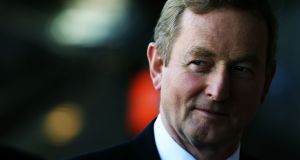 Taoiseach Enda Kenny was asked four times this morning if he will call the election before Christmas and declined on each occasion to say whether it will take place this year or next. Photograph: Brian Lawless/PA Wire

Taoiseach Enda Kenny has said his decision on when to call the general election will be “made in the best interests of the country” but declined to say when the contest will be held.

Mr Kenny was asked four times by RTÉ News this morning if he will call the election before Christmas and declined on each occasion to say whether it will take place this year or next.

When asked on previous occasions, the Taoiseach has said he saw no reason to change from his original intention to have the election early next year, most likely around February or March.

There has been increasing speculation over the past week that the general election will be held in November, and Minister for Finance Michael Noonan has said Mr Kenny has two windows available to him – before or after Christmas.

The Taoiseach was this morning in Co Mayo at the Killala site where a new renewable energy facility is to be built. The development is expected to lead to the creation of 350 jobs.

Initially asked if he would be out on doorsteps before Christmas, Mr Kenny did not answer the question but spoke about the positive impact of the development on the old Asahi site, which he described as a “very significant statement about provincial Ireland”.

He was then asked again if the election will be held before Christmas, and replied: “Put it this way – I’ve a million opinion makers and one decision-maker.”

When asked to elaborate, Mr Kenny said: “My focus is on the budget and on continuing to develop our economy so that people can say there is now some clarity about my job and my work and I now have an opportunity for my children coming behind me to have employment in this country if that is what they want to do.”

The Taoiseach was then asked again if the election will be held before Christmas.

“You don’t expect me to make any comment on that. People want to speculate. Everything I do now is the context of an election, or so they say. I’ve got to make that decision and I will make that decision in the best interests of the country.”