Kenny calls on senior figures to give information on Anglo 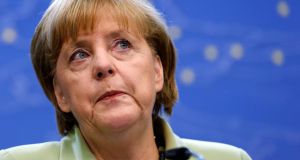 Taoiseach Enda Kenny has called on senior figures who know the truth behind the Anglo Irish Bank debacle to “stand by” the Republic and come forth with the information they hold.

Saying the affair had undermined Ireland’s reputation, Mr Kenny said he agreed with German chancellor Angela Merkel who declared overnight that the information disclosed in the Anglo tapes was damaging for democracy.

“They show the contempt and the arrogance and the insolence of senior personnel working in that bank towards everybody, towards government, towards citizens, the impact on every company, every community, every family in our country,” the Taoiseach said.

Renewing his attack on the previous Fianna Fáil-led administration, he said the tapes underlined the requirement for a parliamentary inquiry.

“We do need to be able to examine the culture of the so- called Tiger years which led to this situation of a toxic nexus between the banking world and the world of government and senior personnel,” Mr Kenny added.

“In that sense we have worked very hard to rebuild our integrity and our reputation abroad. That’s happened.”

Echoing language used by Progressive Democrats founder Des O’Malley in a landmark Dáil speech in 1985, Mr Kenny said “those privileged people” who worked in and controlled the system must “stand by our Republic”.

The Taoiseach’s remarks – at a joint press conference with European Council president Herman Van Rompuy and European Commission chief José Manuel Barroso – came at the end of a two-day summit in Brussels.

Although the summit gave Mr Kenny a platform to highlight the achievements of Ireland’s outgoing EU presidency, Dr Merkel’s response drew attention to the Anglo tapes.

“I have nothing but contempt for this,” she said. “For people who go to work every day and earn their money, it is very, very difficult to understand, if at all.”

Mr Kenny said all leaders at the summit understood the tapes were recorded in the past. The Taoiseach’s spokesman said there was no contact with the chancellor over her remarks.

“We entirely understand the direction in which they were pointed, which was directly at banking malpractice.”

The conclusion of the presidency has triggered some speculation in Brussels that Mr Kenny may emerge as a contender for the centre-right European People’s Party, Fine Gael’s affiliate in Europe, to succeed Mr Barroso next year.

Two senior European sources said a successful presidency and a smooth exit from the bailout could stand in his favour.