Kenny asks orders to ‘reflect’ on refusal to pay redress

Taoiseach Enda Kenny has called on the four religious orders who ran the Magdalene laundries to “reflect” on their refusal to pay into a redress scheme for the survivors. 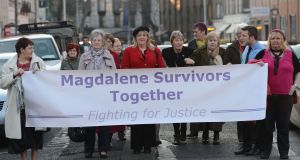 Survivors of Magdalene Laundries on their way into Leinster House to sit in the public gallery for the debate on the McAleese Magdalene report in February. Photograph: Alan Betson/The Irish Times

Taoiseach Enda Kenny has called on the four religious orders who ran the Magdalene laundries to “reflect” on their refusal to pay into a redress scheme for the survivors.

The four orders have told the Government they will not contribute to the redress scheme set up to compensate the former residents of the laundries. The scheme is expected to cost between €34 million and €58 million.

Mr Kenny told the Dáil today that for 60 years successive governments had done nothing about the situation of the Magdelene women.

He said the survivors did not want tribunals or lawyers but a speedy response and an apology from the State. He asked the orders to “reflect” on the question of making a monetary contribution.

“I cannot force them to, because the scheme was not designed on that basis.’’

Mr Kenny said he had no intention of going down the legal route of confrontation with the religious orders. A process had been put in place, at the request of the Magdalene women, that the matter be dealt with speedily and effectively and compensation paid.

He added that the orders knew about the accountability involved and that it was coming from the hearts of the women who demanded the State do something.

“They can make a decision, on reflection, to make a monetary contribution,’’ he added.

Mr Kenny was replying to Sinn Féin leader Gerry Adams who said the institutions should be accountable if they wanted to restore faith in society and politics.

“The issue of liability is at the core of all of this,’’ he added.

Mr Adams said he did not believe it was good enough for the Government to be “disappointed” at the decision of the orders.

He asked what the Government intended to do to ensure that the orders that had benefited from the “enslavement” of women paid their fair share into the redress scheme.

Minister for Justice Alan Shatter earlier ruled out stripping the orders involved in running the Magdalene laundries of their charitable status.

He told the Dáil yesterday he believed the orders had a “moral and ethical” obligation to contribute.

One of the groups representing the former residents, Magdalene Survivors Together, called on the Government to strip the orders of their charitable status.

Spokesman Steven O’Riordan said access should be sought to their accounts and their assets.

But Mr Shatter said today he did not see any purpose in “name-calling”.

Speaking on RTÉ’s Morning Ireland programme, he said he understood Mr O’Riordan’s emotional response but he could only urge the orders to meet the ethical and moral obligation he believed they had.

Mr Shatter said the question of awarding charitable status was a statutory one and that he could not interfere in statute law.

“We do welcome the fact though that they are actively participating in ensuring that we can validate claims made and validate lengths of stay of former residents in the Magdalene laundries,” he said.

“This is a moral and ethical issue. The Magdalene laundries as we know provided a form of refuge for many women, but it was an extraordinarily harsh regime and there was the issue of women working unpaid in the laundries and the impact on their lives of the experience of the laundries.”

An inter-departmental committee, chaired by former senator Dr Martin McAleese, presented the Minister with its report on State involvement in the laundries in February.

Taoiseach Enda Kenny later apologised on behalf of the State to the women who had been in the laundries.

That same day it was announced that Judge John Quirke would review the McAleese report findings. His recommendations were received by Government on June 5th.

The United Nations torture watchdog has criticised the McAleese inquiry, saying it lacked many elements of a “prompt, independent and thorough” investigation.

The UN Committee Against Torture wrote to the Government in May asking for information as to measures the State was planning to take “to ensure there is a full inquiry into all complaints of abuse”, as the committee had originally recommended.

Mr Shatter said the reality was that for many years the story of the Magdelene women had been ignored and that, as Minister, he had been determined to get to the truth of what happened.

He said Dr Martin McAleese had published a “very comprehensive” report on the laundries. Mr Justice Quirke had made a series of recommendations for a redress scheme and over 200 women had already applied to that scheme.

Mr Shatter said he hoped the congregations would reconsider the approach they had taken.