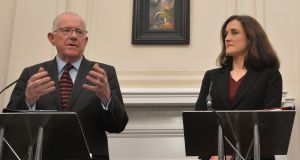 Taoiseach Enda Kenny and British prime minister David Cameron have hailed the new Stormont deal agreed on Tuesday as an “important turning point” for Northern Ireland, and a “breakthrough” in tackling paramilitarism and cross-Border crime.

After 10 weeks of negotiations, the British and Irish governments and the DUP and Sinn Féin signed off on a deal that addresses issues such as welfare reform and criminality but failed to resolve difficulties over how to provide for victims and survivors of the Troubles.

DUP First Minister Peter Robinson and Sinn Féin Deputy First Minister Martin McGuinness also welcomed the agreement. The SDLP and Ulster Unionist Party said they would not be rushed into a definitive response to what is called the Fresh Start: The Stormont House Agreement and Implementation Plan.

They said it was a “good day” for Northern Ireland in that devolution was protected and Northern politicians had agreed a “shared objective of ridding society of all forms of paramilitary activity and groups”. Prior to the agreement, the Northern Executive and Assembly were under threat over a refusal to implement British government welfare reform and due to the fallout from the police assessment the IRA still existed and some of its members were involved in the murder of Belfast republican Kevin McGuigan.

The deal provides for the creation of an international body, similar to the disbanded Independent Monitoring Commission, to adjudicate on the status of paramilitaries.

It also allows for the establishment of a taskforce involving the Garda, PSNI, the British National Crime Agency and customs officials on both sides of the Border to combat cross-Border crime.

Ms Villiers, Minister for Justice Frances Fitzgerald and her northern counterpart David Ford are to meet shortly to put the taskforce in operation. Ms Villiers held to her position of refusing to provide more money to cushion the effects of British government welfare reform in Northern Ireland.

The Northern Executive, however, from its own resources is to provide additional money to assist welfare recipients.

A total of £585 million is to be allocated over the next four years, whereas under the stalled Stormont House Agreement of last Christmas £564 million was to be provided over six years.

The £2 billion in extra spending the Northern Executive was promised will be forthcoming minus what would have been the cost of creating the bodies to deal with the past. Moreover, an additional £500 million is provided to assist the cross-Border task force, and to assist in programmes to normalise society and bring down some peace walls.