Keaveney crosses the political Rubicon for a second time

Analysis: Keaveney is not a wall flower and it is certain Fianna Fáil consider him worth the risk, writes Harry McGee 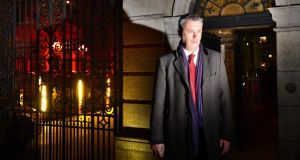 Colm Keaveney photographed outside the Dáil after he voted against controversial Social Welfare cuts in December 2012. He was the fifth TD at the time to leave the Labour Party parlimentary party since the coalition with Fine Gael was formed. Photograph: Brenda Fitzsimons/The Irish Times.

When he made the fateful decision to vote against his own party in a Budget Colm Keaveney used a Latin phrase: “Alea iacta est”.

Its meaning is the the die has been cast. It referred to the decision by Julius Caesar to cross the river Rubicon and challenge the authority of his own party.

For a second time in this Dáil, Keaveney has gone on such a fateful journey.

His decision to join Fianna Fáil - and its decision to accept him - is by far and away the most high-level defection in parliamentary politics for quite some time. It is an intriguing and interesting prospect and will certainly provide a talking point in the days and weeks to come.

Political parties in opposition always love being able to announce that they have acquired a prize from another party. Fine Gael paraded Cáit Keane and Mary Mitchell O’Connor (both of whom were councillors at the time) and Ciaran Cannon when they left the PDs during the last Dáil term. The message is obvious. These politicians are disillusioned with the Government and are joining us because they see us as having a more credible message and being the party of the future.

So for Fianna Fáil, Keaveney will be presented as a bit of a coup, a signal that those who voted and represented Labour in the last election are looking around and see Fianna Fáil as the best fit.

A number of Labour councillors have already left the party in recent months to join either Fianna Fáil or Sinn Fein.

Will today’s news come as a blow to the Labour Party after one of its best weekends since joining government?

Keaveney, like the other Labour dissidents, did have some support among party grassroots members but the severance of relations with the party leadership and parliamentary colleagues was all but total.

Even while a TD in the party - and as its chair - he often adopted a critical and contrarian stance to party policy, being one of a number seen as the backbench awkward squad.

When he did vote against the party over aspects of Joan Burton’s social welfare budget it was clear that his expulsion from the parliamentary party was not a temporary measure. The residual relationship with former colleagues cooled in the period afterwards. That cleaving was complete with the very strong stance he adopted against abortion legislation.

Keaveney has learned since then that it is harder to make an impact outside a political party. It is noticeable that his profile has been lower in the past year, despite suggestions that he was toying with the idea of a run at the European Parliament.

What kind of fit will he make for Fianna Fáil? He was an independent before joining Labour and there are some connections with Fianna Fáil in the past.

Keaveney is a personality politician and does strike some very independent - and rebellious - views and it will be interesting to see if his new party deals with that. In other words, Keaveney is not a shy wall flower and it is certain Fianna Fáil are fully aware of that and consider him worth the risk.

It’s certain that he will cause a bit of ruction in the constituency. Micheal Kitt is the sitting TD in the constituency of Galway East. It is being reduced from a four-seat to a three-seat constituency. It’s a long shot for the Fianna Fáil to win two out of three, although Kitt has yet to announce his own intentions (he will be 65 at the time of the next poll).

As it was, it would have been a long shot for Keaveney to retain his seat, even as an independent. In a reduced constituency, the two big parties are likely to predominate although there is a strong independent candidate, Sean Canney, in Tuam. Keaveny’s former colleague Lorraine Higgins also intends to stand for Labour here from her Athenry base. Incidentally, there were strong rumours about Fianna Fáil trying to woo Ms Higgins earlier this year but, if true, it came to nothing.

Will it demoralise Labour? Some of its TDs and Senators didn’t enjoy the best of relationships with Keaveney and will not be sorry to see him go.

However, overall the optics will not be great for the party and will take a little sheen of its party conference this weekend, which was seen as successful.

The timing of it aside, it’s also sure that his former colleagues will remind Fianna Fáil TDs and Senators of some of Keaveney’s comments on the party over the past few years.

He was particularly critical of it when the Mahon Report was published in 2012.

“Fianna Fáil is constantly referenced in the report, which bears testimony to the corrosive and destructive nature of Irish politics, as a consequence of the effect that Fianna Fáil has had on Irish politics down through the years.

“The rampant corruption of many of Fianna Fáil’s members and public representatives is part of the philosophy of tolerance that existed within the party.”

I daresay he will be reminded of those words in the days and weeks ahead.

1 Coronavirus: What we know so far about how Ireland is affected
2 Cancellations and confusion as coronavirus threat edges closer
3 Mass gatherings due to go ahead in Ireland amid coronavirus outbreak
4 ‘Several killed’ in shooting at Milwaukee brewing company
5 Couple challenge decision over access to Killarney lake
Real news has value SUBSCRIBE