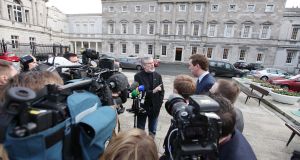 Sinn Fein resident Gerry Adams pictured speaking to media on the plinth at Leinster House,Dublin to comment on reports that more than 1400 children will spend Christmas in emergency accommodation this yearÉÉPic Stephen Collins/Collins Photos

Sinn Féin president Gerry Adams insisted the judiciary can make mistakes as he was answering questions about the conviction of Thomas ‘Slab’ Murphy’.

Mr Adams stood by his comments that Mr Murphy, convicted of tax evasion, was a good republican and was entitled to a trial by his peers.

“The certainty for citizens is that we are tried by our peers. That is the safest process. Juries can make mistakes aswell.”

Mr Adams said he did not know if Mr Murphy was a member of the Irish Republican Army and these were all questions for him.

He said he did not accept the claim that if you were involved with the IRA you were a criminal.

Mr Adams said: “I don’t believe that people who were involved in the IRA, if he was in the IRA, are criminals.”

Speaking at Leinster House, Mr Adams insisted he had not spoken to Mr Murphy since his conviction last week.

The Sinn Fein leader denied this had caused a split within the party and said any reports of a divide was “wishful thinking”.