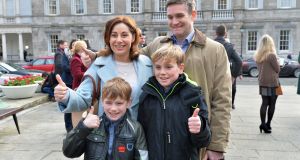 Josepha Madigan with her husband Finbar Hayes and sons Luke and Daniel ahead of the first meeting of the 32nd Dáil at Leinster House. Photograph: Alan Betson / The Irish Times

Josepha Madigan has been appointed as the new Minister for Arts, Heritage and the Gaeltacht by Taoiseach Leo Varadkar.

She replaces Heather Humphreys who will now become Minister for Business, Enterprise and Innovation after Frances Fitzgerald’s resignation.

Josepha Madigan was elected a TD in the 2016 general election. She was a key figure in the leadership campaign of Taoiseach Leo Varadkar.

Ms Madigan was a first-time councillor when elected to the Stillorgan ward of Dún Laoghaire-Rathdown County Council in 2014.

She has been a practising solicitor for the past 17 years and is head of the family law and civil litigation department at Madigans Solicitor.

Her main area of expertise is divorce and separation.

Like her former running mate Alan Shatter, she is a novelist having self-published “Negligent Behaviour” in 2011.

As a TD, she moved legislation to reduce the divorce waiting time from four years to two.