Biography: TD previously served as Minister for Arts, Heritage and the Gaeltacht 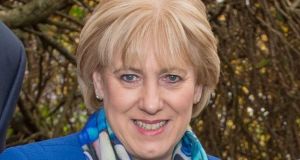 Heather Humphreys had served as Minister for Minister for Arts, Heritage and the Gaeltacht since 2011. Photograph: Barry Cronin

Heather Humphreys, who has been appointed Minister for Business on Thursday, was first elected a TD in the Cavan-Monaghan constituency in 2011.

Ms Humphreys was the first woman to be elected for Fine Gael in the constituency. Since 2011, she has served as Minister for Arts, Heritage and the Gaeltacht.

She was embroiled in controversy when Fine Gael nominee John McNulty was appointed to the board of the Irish Museum of Modern Art in advance of a Seanad byelection he was contesting for Fine Gael.

He later resigned and withdrew from the byelection.

She was also in charge of the commemoration of the 1916 Rising. This drew widespread praise, although she also found herself on the wrong side of a High Court ruling on the preservation of the Moore Street “battle field” site in 2016.