John McNulty got Imma post within two days of request

Department of Arts officials were asked which State boards had vacancies 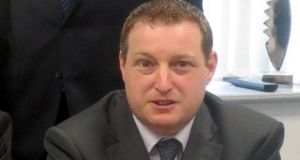 Department of Arts officials were asked two days before John McNulty was appointed to the board of the Irish Museum of Modern Art (Imma) which State boards under its control had vacancies.

Documents released to The Irish Times under the Freedom of Information Act show Minister for Arts Heather Humphreys had appointed him to the board within two days of it being established there were vacancies at the museum.

The emails lend credence to Opposition claims that Ms Humphreys was pressed by unnamed Fine Gael officials to appoint Mr McNulty quickly to the board of a cultural institution in order to boost his credentials for the cultural and educational panel of the Seanad.

Mr McNulty was confirmed as the Fine Gael candidate for the byelection in the Upper House less than a week later. The vote was held to fill the seat vacated by Fine Gael’s Deirdre Clune on her election to the European Parliament.

In all, there are only three internal emails relating to the appointment. The department also released the letter of appointment written by Ms Humphreys to Mr McNulty, as well as his acceptance letter.

His CV, which was received by the department on an unspecified date, was not released on the grounds it contained personal information.

The first released document is a short email on September 10th from Breda Moynihan, an assistant principal in the culture institutions unit, to the department’s secretary general Joe Hamill, giving an update prepared that day on board vacancies.

In a follow-up email that afternoon, department official Tadhg O’Shea informed the department’s assistant secretary, Niall Ó Donnchú, that the last appointment to the board of Imma had been former Labour councillor Jane Dillon Byrne on May 30th, 2014.

“There were to be some more appointments but they never happened,” wrote Mr O’Shea.

He confirmed there were six vacancies but added: “This level of vacancies was maintained up until now in accordance with the provisions of the Public Service Reform Plan, in which the membership of the board of Imma was to be reduced to nine members.”

Mr McNulty stepped down from the board and asked TDs and Senators not to vote for him in the byelection. Ms Humphreys maintained she had appointed him solely on merit.