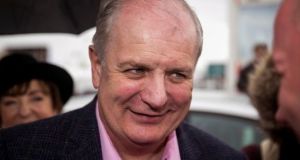 Gavin Diffy said of the incident: “It is a moment in my life that lives vividly and painfully in my memory. Photograph: Liam McBurney/PA Wire

Presidential election candidate Gavin Duffy has expressed his regret over his involvement in a crash 40 years ago in which a young woman was seriously injured.

In a statement issued following the publication of a story in a Sunday newspaper about the events, Mr Duffy confirmed that in August 1978 a car he was driving was in collision with the woman who was riding a motorbike.

“It is a moment in my life that lives vividly and painfully in my memory. It was early on a dry, sunny morning. The motorcyclist had left her home in Northern Ireland and I was travelling to work in Dundalk,” Mr Duffy said.

“We so nearly didn’t collide; another couple of inches and there would have been no impact. However, the motorcyclist’s leg came in contact with my car bumper causing the motorcyclist severe injury.”

Mr Duffy confirmed that in the subsequent court case, he was convicted of careless driving.

“The evidence before the court outlined how I was driving within the speed limit. However, I was also prosecuted for driving without insurance. I had missed my lift to work and, without permission, had taken my brother’s car,” he said.

“I should not have been driving that morning and have accepted the blame for what transpired. Because of my remorse over what occurred, I made a settlement, when in my early 20s with the Motor Insurance [Insurers’] Bureau (MIBI).

“I toiled around the clock, working on radio by day and a club DJ at night, to raise the sum, after tax, of 35,000 punts to make a final settlement with the MIBI,” Mr Duffy said.

“That sum then would have purchased a first home back in the early 80s. Despite intense pressure from the insurance legal team to enter a defence in the 1985 High Court case, I declined to do so and accepted, as I still do, 40 years later, that I was at fault.

“I believed, as I do 40 years on, I was fully responsible for the accident because I should not have been driving a car that morning. Once again can I repeat my regret over the incident 40 years ago. To all young drivers I would say please, please drive carefully and always legally with insurance.”

The negligence and personal injury case in the High Court concluded in June 1985.

The report in the Irish Mail on Sunday outlined that Mr Duffy was prosecuted for the careless driving offence in his birth name of Liam (William) Duffy.

Mr Duffy told the newspaper he began using Gavin as a broadcasting name in 1977 and formalised it in the 1980s.

1 Boy’s treatment by school over alleged thefts was ‘unbelievable’, judge says
2 Irish in Canary Islands: Life has changed dramatically
3 Pubs to stay closed until September at least as restrictions tightened significantly
4 ‘This was like a nuclear bomb’: More than 2,700 injured in Beirut explosion
5 Pubs to stay closed and restrictions to remain on all gatherings, Cabinet decides
Real news has value SUBSCRIBE