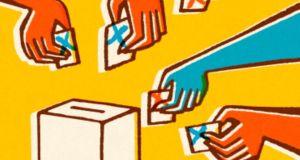 While there has been much talk about the same sex marriage poll, the referendum that seems to have slipped under the radar is the proposal to reduce the age of presidential candidates from 35 to 21.

The kindest thing you can say about this Government’s record on referendums is that is has been patchy.

The Coalition has committed to holding two more referendums in May.

While there has been much talk about the same sex marriage poll, the referendum that seems to have slipped under the radar is the proposal to reduce the age of presidential candidates from 35 to 21.

Given the mood of the electorate and some surprising referendum results since the Fine Gael/Labour Government came to power, who knows how that might turn out?

At first glance it does not seem like a contentious proposition, but the Government parties could find themselves in trouble again if they cannot turn up credible voices to argue in favour of the age reduction.

Is it possible that many voters might simply think to themselves, ‘I think 35 is plenty young enough to be a presidential candidate’?

Advanced years could perhaps be seen an advantage in presidential elections. In the last contest, the eldest candidate Michael D Higgins (then 70) saw off the youngest Sean Gallagher (then 49).

Mr Higgins’ deportment as he represents Ireland around the world has been widely praised since.

Anyhow, this Government has done little to court the youth vote to date. Plans to hold a referendum to reduce the voting age from 18 to 16, as recommended by the Constitutional Convention, have been quietly dropped.

This was despite a commitment in July 2013 that a referendum to reduce the voting age to 16 would be held this year.

There was considerable opposition by senior figures in both Government parties to the proposed reduction in the voting age. Labour in particular used to be very much in favour of giving younger people the vote, but now fears the cohort is gravitating towards Sinn Fein.

Today in The Irish Times today, two academics outline arguments for the Yes and No sides in the presidential candidate age referendum.

Dr Theresa Reidy, a lecturer in the Department of Government at University College Cork, advocates a Yes vote. Meanwhile, Colum Kenny, Professor of Communications at Dublin City University, calls for a No vote.

You can participate in our online poll by answering the question: Should the age of candidacy for the presidential election be lowered from 35 to 21? When I last checked the results the Nos were in the lead by 71 per cent to 29 per cent.

Finally, you might like to refresh your memory on the Government’s referendum record by reading this recap of polls:

The Coalition kicked off its series of promised referendums with two polls on the same day in October 2011.

The referendum to reverse the Abbeylara judgment and allow Oireachtas committees to carry out full investigations was rejected, while the referendum to cut judges’ salaries was accepted.

The fiscal treaty referendum, held at the end of May 2012, was passed.

The Childrens Referendum was accepted in November 2012 but with a paltry turnout and a narrow majority, proving that polls can sometimes be a poor predictor of referendum results.

This was followed by a bloody nose for the Government parties when the abolition of the Seanad referendum was rejected in October 2013.

On the same day, the Court of Appeal referendum was accepted.