Irishman set to be appointed new EU ambassador to Washington 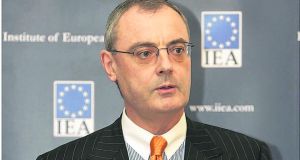 David O’Sullivan: considered to be one of the EU’s most senior civil servants

Irishman David O’Sullivan is set to be appointed the next EU ambassador to Washington.

Mr O’Sullivan (60), the top official at the EU’s foreign affairs wing, is the only nominee for the position which is up for renewal later this year, The Irish Times has confirmed.

Speaking in Brussels this morning where he is attending a meeting of foreign affairs ministers, Minister for Foreign Affairs Eamon Gilmore said it would be an "honour" for Ireland, if Mr O Sullivan is appointed EU ambassador to the US.

The appointment of an Irish candidate to the position will be seen as a major diplomatic coup for Ireland, less than five years after former taoiseach John Bruton completed a five-year term as the EU’s ambassador to Washington.

While the official nomination process is still under way, it is understood the European Commission has backed Mr O’Sullivan’s nomination, which must be approved by the head of the European External Action Service, Catherine Ashton.

With the formal interview for the position due to take place in about three weeks, an official announcement is likely in March, with the new candidate taking up the four-year post in September.

Dublin-born Mr O’Sullivan, who joined the European Commission in 1979, is one of the EU’s most senior civil servants.

Having initially worked in external relations, he moved swiftly up the ranks to become secretary general of the European Commission for five years under Romano Prodi.

Following the establishment of the European External Action Service, under the Lisbon Treaty, Mr O’Sullivan became its chief operating officer of the new body.

Mr O Sullivan will take the helm at a delicate time in US-EU relations. Controversy over the extent of US surveillance across Europe as well as within the EU institutions has strained relations.

The move to again appoint a top civil servant, rather than a former political figure, is being perceived as a sign of a long-term change in approach by the EU in how it appoints the union’s top ambassadorial job.