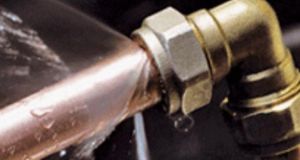 Government sources said a Eurostat decision will be factored into October’s budget. The Coalition has insisted that Irish Water will be treated as a semi-State company.

Irish Water’s spending is provisionally included on the Government books until at least 2020 in the figures published yesterday. However this could change if Eurostat accepts the Government’s case that the utility’s spending should be kept off balance sheet. A decision on this is expected by October, when the figures will be revised ahead of the Budget.

The Stability Programme Update to the European Commission confirms the expenditure of Irish Water is being treated as general government spending and its borrowing is also being considered as government debt.

The document says this is being done on a “provisional basis” until it awaits the decision from Eurostat.

It reads: “Pending this final adjudication, it is prudent for forecasting purposes to treat all of Irish Water’s forecast expenditure as general government expenditure on a provisional basis.

“Revenues generated by Irish Water are also included in general Government revenue with all transactions between Government bodies and Irish Water being consolidated.”

Fianna Fail’s spokesman on Public Expenditure Sean Fleming said this was the Government preparing people for the worst case scenario.

He said Michael Noonan and Brendan Howlin needed to be honest with people about the reality of the situation.

A decision by Eurostat is now due in the Autumn after several delays.

Government sources insist this will be factored into October’s Budget. The Government has insisted that Irish Water will be treated as a semi-state company and its finance will be separate from the Government. If Eurostat accepts its case, then more money will be freed to invest or spend in other areas, without breaching EU spending guidelines. However if Irish Water remains on the state books it will limit spending on other areas.

Government figures confirmed the Central Statistics Office wants it off balance sheet and Mr Noonan indicated Eurostat is likely to accept that recommendation.

That decision is to become known later this year with opposition parties speculating it could be as late as October.