State will take in 4,000 refugees over two years as part of EU response to crisis 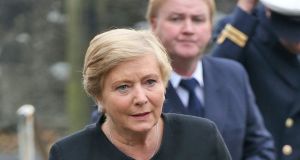 A full network of centres for refugees arriving into the country as part of Ireland’s response to the European migrant crisis should be operational by the new year, the Department of Justice has said.

Minister for Justice Frances Fitzgerald announced early last month that Ireland would take in 4,000 refugees over the next two years as part of the European response to the crisis.

In a briefing note sent to Ministers on Friday, the department said its network of Emergency Reception and Orientation Centres (EROCs) will be in place when refuges begin arriving to Ireland from migration “hotspots” in Italy and Greece.

Migrants arriving in Italy and Greece will be spread across Europe and the department said arrivals to Ireland will begin by the end of the year or early January, at the latest.

The EROCs will receive incoming refugees before they are sent to more permanent accommodation across the country. However, sources said it is too early to say if the majority of refugees will be accommodated outside Dublin.

Áodhán Ó Ríordáin, the Minister of State at the Department of Justice, last month said the homeless and housing crisis in Dublin means refugees arriving in Ireland should be accommodated elsewhere in the country. A taskforce established by the department is examining how to approach the refugee issue.

“One of the key tasks before the taskforce . . . is the sourcing of suitable accommodation and orientation services for the proposed network of EROCs,” the briefing note says.

“While sourcing suitable accommodation for these centres is not without its significant challenges, it is expected the first centres will come on stream in time to receive people from the migration hotspots before the end of this year or in early January [at the latest], at which point Ireland can start to accept relocated asylum seekers.”

The Hazel Hotel in Monasterevin has already been commissioned to be the “orientation” centre at which 520 programme refugees would first be accommodated between now and the end of next year.

“From the humanitarian perspective, best practice is that persons coming from war-torn regions should be accommodated together in the first instance to provide a level of familiarity through interaction with persons from their own country, culture, language, etc,” the briefing note adds.