Ireland will be supported by EU in Brexit talks, Minister says 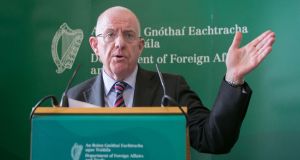 The Government is confident it will be supported by all EU member states when it makes an argument for Ireland’s “unique” circumstances during Brexit negotiations, according to Minister for Foreign Affairs Charlie Flanagan.

The Minister confirmed he had spoken personally to every foreign minister in the EU and said they were unanimous in acknowledging the unusual challenges facing Ireland once Britain left the bloc.

The main issues include the retention of the invisible border with Northern Ireland, the status of the Common Travel Area between Ireland and Britain, and EU involvement in the peace process and institutions established by the Belfast Agreement, as well as the substantial trading relationship between both islands.

Mr Flanagan said he began the round of one-on-one engagements, mostly in person but also by telephone, soon after the British referendum result in late June.

The series of contacts was completed this week with a telephone conversation with George Vella, the foreign minister of Malta.

“I completed my engagement in speaking to each and every one of the my foreign ministerial colleagues this week,” he told a press briefing in Dublin.

“I was anxious to ensure the unique position of Ireland was acknowledged. I was encouraged by the understanding of my foreign ministerial colleagues to our position.”

But he was highly encouraged by the support for Ireland’s position, as well as the level of engagement involved in the conversations.

He said there was a high degree of awareness of the success of the peace process in the North, and the EU’s role.

“We do not believe that reimposition of a hard border is in the interests of anybody,” the Minister said.

“In any event, it will be inoperable. During the period of the Troubles, it was impossible to seal that Border.”

In relation to an all-island forum or dialogue on Brexit, which the Taoiseach has said he wants established from September, he said a formal round-table exercise would only be successful if there was participation by every party.

“I don’t believe it’s workable without involvement and full engagement of all parties,” he said.

When asked if a forum would go ahead even in the absence of the Democratic Unionist Party, Mr Flanagan repeated that it needed the widest possible level of engagement.

Sinn Féin leader Gerry Adams has already called on the Government to proceed with the forum even if the DUP or its leader, Arlene Foster, refuse to participate.

The department has created a micro-site to give advice to the 1,000 expected to travel to Brazil, and has included it on its travel advice app available on smartphones.

“With regard to the Zika virus, we are recommending that women who are pregnant, or who are trying to become pregnant, should consider postponing their travel,” the Minister said.

Responding to questions, he also strongly backed Enda Kenny to continue as Taoiseach, saying he had been party leader for 14 years and brought vast experience to negotiations with EU colleagues on Brexit.

Asked about the case of Irish citizen Ibrahim Halawa in Egypt, Mr Flanagan said he remained very concerned at his continued detention.

He said no consular case involving an Irish citizen was receiving as much attention or focus as Mr Halawa’s case. He said the trial was now scheduled for October 2nd.

“My desire is this trial would produce a verdict on that day,” he said.

“We want him home with his family to resume his studies. He has been detained now without trial for an inordinate period of time. We believe it is unacceptable. We believe trial should be concluded” as quickly as possible.