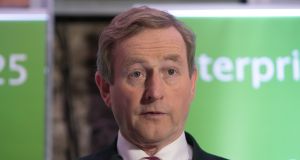 Taoiseach Enda Kenny said he had been briefed this morning by the national security committee. Photograph: Collins

The Government is prepared to send additional Irish troops to Mali or Lebanon in order to relieve French soldiers who will be sent to fight Islamic State, Taoiseach Enda Kenny has indicated.

Mr Kenny said the French ambassador to Ireland has told him France is already stretched in its military commitments as it prepares to intensify its efforts against Islamic State in Syria.

Speaking on Thursday at an Action Plan for Jobs press conference, Mr Kenny said no formal request had come from France to the Irish Government requesting aid.

However, Mr Kenny indicated the Government is prepared to send a small number of Defence Forces personnel to Mali or Lebanon to relieve their French counterparts.

“We have said that, within our conditions and our circumstances, we will assist in whatever way we can here, though probably the numbers will be small,” Mr Kenny said.

French president Francois Hollande has said his country is at war with IS and the French government this week invoked a mutual defence clause within the European Union’s Lisbon Treaty.

“When I signed the book of condolences at the French embassy the other day, the French ambassador did mention this to me that France is now very stretched,” the Taoiseach said.

“At the meeting of (EU) ministers for defence during the week, the French defence minister invoked the relevant article from the European treaties looking for help.

“It’s a matter for every country as to their own national security and defence position, how they might assist in that regard.

We have been working with the French in Mali, 10 members of the Defence Forces out there doing particular duties. “Now, a formal request has not come in from France yet. It may come through the Minister for Defence, it may be dealing with extra personnel that the French may withdraw from south Lebanon or Mali or whatever.

“The point the French make is that the French president has declared that France is at war in respect of these incidents in Syria. The French defence forces are stretched in quite a number of countries and they may make a request for assistance in that regard.

Obviously, there is a process by which Ireland being a neutral country would offer assistance in particular forms and we would consider that when it comes.”

“The situation insofar as Ireland has concerned has not changed since the Paris attacks. An incident is possible but not likely.”